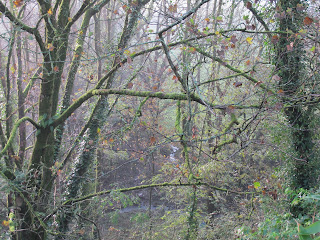 On November 4th last year Lins Lleisio from Multigenerational Living And Life In Wales published this post. If you look, my comment underneath says:

If you had that photo blown up and made into a poster - I'd buy it and hang it in my study. Just beautiful!

The next thing I knew, Lins contacted me and offered to send me the photo by email. So I had the photo and I trotted off to the photo-shop to ask them if I could email it to them. No, I couldn't. So I went to Office Depot to buy my first ever diskon key (memory stick) and hoped I'd be able to work out how to use it. It was easy. Trotted back to the shop and ordered a modest sized blow-up of the photo so that I'd be able to buy a clip on frame in the shop (at about 40 shekels) and Bob's your uncle, a new piece of art for the spudy.

The enlargement took one week and I went to collect it. However, they'd made a mistake, They'd accidently made me the largest size (value 150 shekels) instead of the size I ordered (value 99 shekels). But as it looked fabulous, I took it at no extra cost to myself. Only they don't have clip on frames that size so off I went to the local framer.

It was December 8th by this time. I chose my frame and the framer told me it would take slightly longer than usual - two weeks instead of one, due to the imminent Hanukah holiday. And it would cost 290 shekels as it had to be stuck to a board by a professional sticker. At this point I should have marched straight back to the photo-shop and demand they redo the enlargement in the size I originally ordered. But I didn't.

So three weeks go by and it's now January. I hear nothing from the framer. February blows in. Nothing. I think I called him in March. "Oh I've been meaning to call you," he says, and then gives me a long story about the frame being out of stock and the new frames that came in not being up to standard. I don't really care. I just want my picture. At some point I worked out that if I told the framer it was too late and I didn't want it anymore, it would be cheaper to cut my losses and start over rather than wait for the large framed version. But I didn't.

I met the framer in the street at the beginning of May. "I have your picture," he informs me, "it's ready!" It crossed my mind that it was a good job we'd met in the street. So I went in to get it. It wasn't there. It was in his storage unit and he was just off to get it now. What a coincidence. So I went in three days later after receiving a text message informing me of the opening times. There was a note on the door - Be back in 20  minutes. I didn't wait.

I phoned later and got the answering service. He called back and gave me a lecture about leaving my name next time I call as he can't always get to the phone. (Yeah, I will next time I don't want my framing returned for over 5 months!)

So I picked up Lins' photograph on May 14th - five months and one week after I'd given it to the framer. I do love it though. It's a little bit of Wales in Jerusalem. Here it is on the wall (next to Camping In The Wye Valley so it should feel at home). 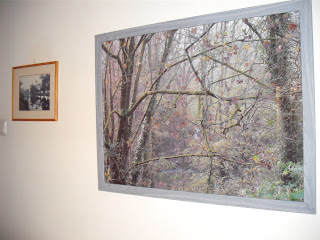 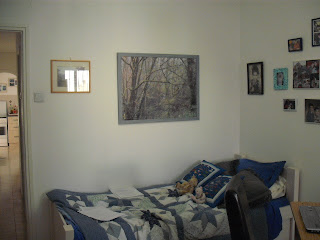 Thank you Lins, I love my little bit of Wales and I'm sorry it took so long for you to see the results of your beautiful photography.

Email ThisBlogThis!Share to TwitterShare to FacebookShare to Pinterest
Labels: Art I Heart, life in Israel, Wales