I have this theory that the length of a holiday depends on the size of the country. I base it on the fact that kids in America go to summer camp for up to two months, in the UK we used to go for 2 weeks, and in Israel people go on holiday for 2 or 3 days.

On the last Sunday before school went back I received an email from a friend saying we (four mothers with four children) were going camping for one night at Dor Beach - Tuesday to Wednesday. I immediately went into a panic. I hate the beach, I don't own a tent, it all seemed so much effort for one night. So I waited for one of the others to wimp out first so I wouldn't look so bad. It didn't happen. 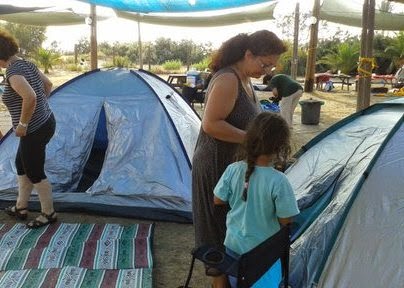 Our leader talked me through it. We would leave on Tuesday at lunchtime, spend the afternoon on the beach, cook dinner, the next morning we'd make breakfast, spend a few hours on the beach, go to Zichron Ya'akov for lunch and then come home. Two of the four families are driving from Jerusalem, a 2-man tent costs about 25 pounds from Home Centre, and here is a list of the food you need to bring. How could I refuse, it all sounded so fait accompli, which of course it was.

I bought a tent, another thin foam roll-up thingy to sleep on (I already had one at home) and a folding deck chair. They picked us us at 2pm and we drove in convoy. I bought the ice-creams and drinks en route in lieu of driving. We arrived at the campsite at about 4pm. And this is where it became all Israeli.

Now I am an experienced camper. I grew up camping. I was once the head cook under canvass for 100 people for two weeks. I can pitch a tent single handed. I can wash all over (including my hair) out of a bucket, However, all this was 25 years ago and more. It was camping on clean grass in cool weather. It was when I was young and could sleep on the hard ground. 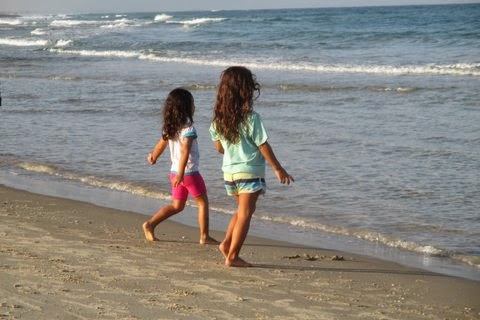 To be fair the campsite was right next to a sandy beach on the Mediterranean Sea. I am still amazed and grateful that I live less than an hour's drive from the Mediterranean. (This beach was a two hour drive as we had to choose a location out of rocket range from Gaza and, it turned out, out of missile range from Lebanon. Just south of Haifa fitted the bill perfectly.) It was beautiful.


However, there was no grass. The campsite was a sort of sandy mud. The beach was full of sand, obviously, and there were two clean toilets and four showers for women in the nearest shower block. It was clean but the floor was flooded from the showers and full of sand. So you didn't wear trousers to go to the loo or shower, you only wore flip flops and then you walked back to your tent through the sandy mud with wet feet. I'm sure there is a way of keeping clean but I didn't discover it.

The challets with grassy gardens, which we couldn't afford were just beyond the fence, in sight, so near and yet so far.

We pitched our four tents in a circle and laid a big ground sheet in the pow wow area in the middle. I say pitched but it's not like the tents I remember. The tents were a one piece dome with sewn in ground sheet and channels where you thread the frame through and just place the whole structure on the ground. No pegs and mallet, no guy ropes, no fly sheet to keep the rain off. Totally alien to me. 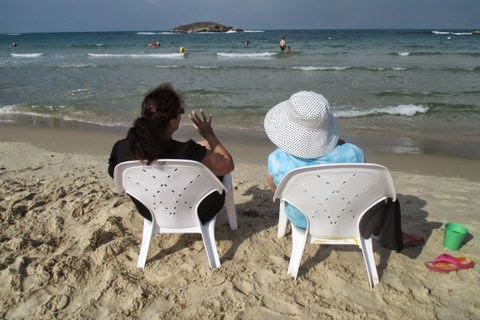 We spent a fantastic afternoon on the beach it has to be said. The water was just rolling enough to ride the swells and thrill the children. The sand was perfect for building forts and castles with moats and canals. And as the sun set we trudged back up to the campsite to shower and make dinner.

Our leader had brought spaghetti with tomato sauce and chicken breasts to cook. Unfortunately the gas cylinder didn't fit the gas ring so the campers nextflap put our chicken on their barbecue. Meanwhile we gave the children pitta and cheese as they were starving and couldn't wait. I cut up Israeli salad (toms/cucs/peppers), and we had tins of corn to go with it. We forgot about the spaghetti. Dinner was more cobbled together than planned but we all kept saying that this year was a trial run for next year, etc... etc...

The kids had an amazing time commandeering the torches and roaming the campsite looking for treasure. We sat and talked, no reading as the torches were off on an adventure. And then, with one last longing look towards the challets, eventually, to bed. 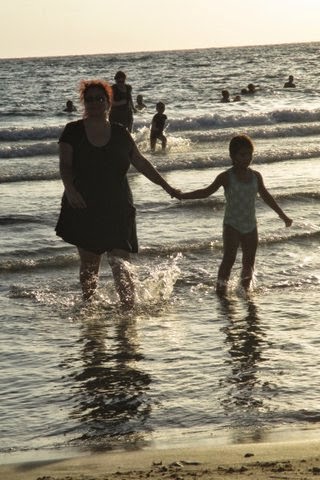 DD and I started out in the tent. It was like an oven in there so we moved our foam thingies outside onto the communal groundsheet, as did two of the other families. I'm so pleased I bought a whole tent to put our bag in - NOT. I would say I slept possibly for half an hour throughout the night but in three 10-minute sessions. I discovered that my days of sleeping on the floor are over. Next year I'm investing in a blow up mattress.

No lights on in the challets I noticed. Even though they had electricity they were all obviously sound and comfortably asleep in their proper beds. Sigh

We were up at 5.30 in the morning. One of our party begged some hot water for coffee off some other campers at about 7am, after 90 minutes of us sitting like de-caffinated zombies. The kids were happy with chocolate spread in pitta and off we went to the beach. A fun morning on the beach, I admit it.

And then home, stopping for lunch in Zichron Ya'akov on the way. It's taken me two weeks to get over the trauma of it all in order to write about it but I know we'll be camping again next year so why fight it?

*Thank you Sarit Doron for the photos.