This week sees three of our regular springtime events. Three very good Reasons 2B Cheerful. I'm linking up with Mich on Mummy from the Heart where you can find more R2BCs. 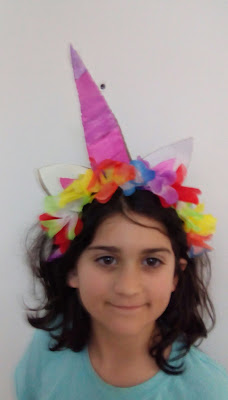 1
Unicorn
After 6 years of refusing to dress up for Purim, DD suddenly decided that she wanted to be a unicorn this year. I was delighted. I took her down to the toy shop and said she could choose whatever she wanted from the costumes and accessories, Here the toy shops stock up on costumes espeially for Purim, like in America before Hallowe'en. With only one child I was willing to pay for whatever she wanted. There was no unicorn and she didn't want anything else so she came home and made her own costume. It was only a head-dress worn with her normal  clothes but this was a huge step forward for us. 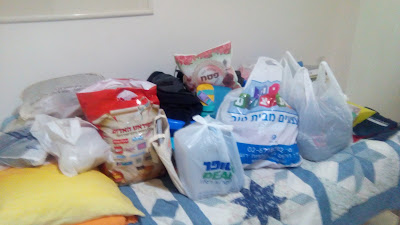 2
The Yedidya Bazaar
The Yedidya Bazaar is next Sunday and Monday. I have a top cupboard where I save things for the bazaar. The first item went into it about one week after last year's bazaar. Don't you hate it when that happens? Anyway, the cupboard was full and I pulled everything out last weekend. The picture shows my hoard before I've even finished. There are a few games and toys I didn't put on the bed because I know that DD won't let them go if she sees them. We also went through DD's clothes and thinned them out. Remember that we took a whole load of games and books to her school market only a few weeks ago.

In the end we have 10 bags of stuff for the Bazaar, 3 bags to return to a friend, 2 bags of outgrown clothes for my downstairs neighbour (aged 4), and a couple of items that DD's very slim friend might like. Result! (Although where we get it all from every year still baffles me.) 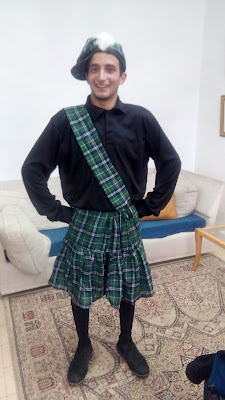 3
Jerualem Marathon
Tomorrow we are bunking school (along with 90% of the pupils) to go and cheer on my nephew in the Jerusalem Marathon, He's running the 10k and the route goes relatively near where we live. Not as near as the full and the half marathon routes which we usually go to watch but near enough to walk to. We'll also see the full and half marathon runners but we won't be standing at the end of the road with our neighbours like last year.

He is threatening to run in his kilt (more of a tartan skirt than a kilt) which he wore for his Purim costume. Well at least we won't miss him if he does.