This week Israel is testing all their emergency and security systems. Today we had two air raid sirens. At the schools and kindergartens all the children had to go to the bomb shelters. I can see DD's school from my balcony. Here is one of the entrances to one of the bomb shelters a few minutes before the siren. 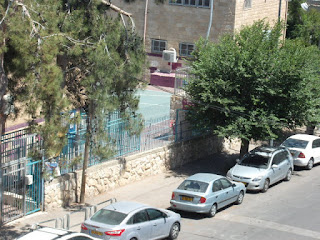 Here is the same view during the siren. 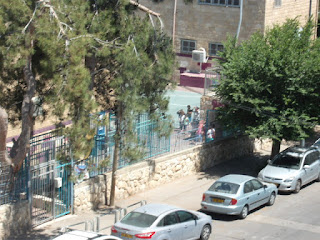 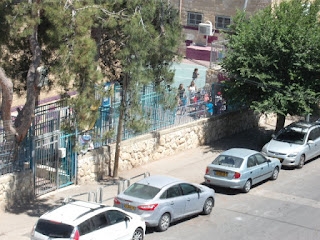 We had fire drills when I was at school. The fire bell rang and the whole school would file out into the playground for counting heads. Girls sitting by the windows must shut the windows before leaving, last one out must shut the door.

Then in about 1976 when IRA bombs were going off in London, we had a bomb scare whilst packing up all our textbooks for the Christmas holidays (why did we do that?). The fire alarm went off and we knew it wasn't a drill on the last day of term. And when we were marched past the playground and all the way down to the car park, we knew it was a bomb scare.

The police (or bomb squad?) had to come and inspect the building for suspicious looking parcels. LOL, 1,000 girls had just wrapped all their textbooks into neat brown paper parcels and thousands more brightly wrapped Christmas presents were placed under trees in every classroom. Eventually they decided it was a hoax. Probably some boys from another school who had broken up the day before - that was the rumour anyway.

In Israel we do this 5-day exercise every year. We at home and at work are also supposed to go down to the shelter, which each building has to have prepared. Those with reinforced security rooms are supposed to go into them.

A few years ago I was one of the few people in my building who had the key to the bomb shelter because I kept DD's buggy in it. As I was working from home I felt obliged to go down and open up. Actually a couple of neighbours also came down so it was good that I went with the key.

This year the bomb shelter has been in a constant state of readiness (I refuse to use the un-word preparedness) since we had to use it for real last summer. None of the adults I know bothered to go to their shelters - believe me, we remember how to do it.

This evening we had another drill and DD is old enough to understand that it's just a practice and old enough to remember how we did it for real last summer. We didn't bat an eyelid.

But watching the children run out of school and into bomb shelters this morning made me cry. I know we've all grown up with fire drills. Some of my friends even remember drills for a nuclear attack during the end of the cold war. Under your desks and hide your face. I know that it's no big deal. Maybe it's a motherhood thing. It just made me so sad that my little girl aged 6 1/2 has to run out of school and practice hiding in a bomb shelter.