She has her own bedroom of course. A whole room to herself where she can be by herself and do whatever she wants in private, even in secret (although we are not allowed to have secrets these days). However, the current exploit du jour is building a den in the salon using the sofa cushions.

Surely she could build something similar in her bedroom using the duvet and pillows? Apparently not. The bed doesn't have the right kind of cushions.

Here she is emerging from today's new house. A sort of Bauhaus inspired design wouldn't you say? 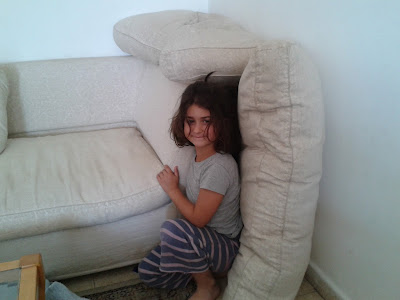 And here is a glimpse of the interior filled with lots of soft furnishings to make it comfortable. 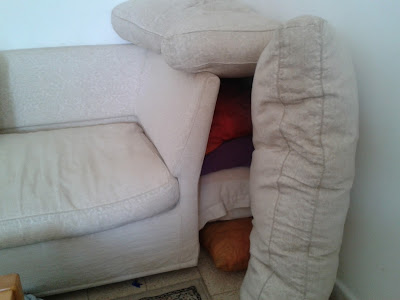 I feel like I'm living in an episode of Your House In Their Hands or Changing Rooms. I never know what I'm going to find when I return from the kitchen after putting the kettle on.