Vegan And Juicing, Information And Misinformation 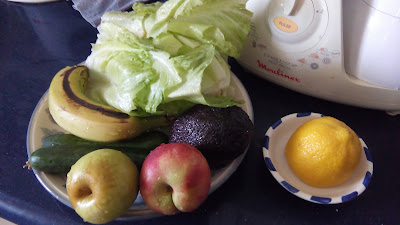 Since starting this clean eating I've read a lot and learned a lot. I've also got a lot of questions and reactions from people who at the least know what I know but seem to assume that I've not read all the same popular articles as they have about the subject. Why is that? (Real scientists not included in this observation.) So here is what I've learned.

1. The most annoying question is: are you going vegan for health or ethical reasons? You have to know why you are doing it. However it's not just a case of picking one of the five stock answers: health, weight loss, ethical (grain going to cows instead of starving people in Africa), environmental (CO2 emissions from cows and water resources used), animal welfare. It's never either/or, it's a mixture of all of them and some more important than others according to your individual circumstances. I gave my reasons here.

2. Since then I've switched to juices rather than smoothies because it felt like I was liquidizing my salads for no good reason, juices are far more refreshing and they do also contain fibre (especially with my cheap juicer) just less. Also a 'fast' in this context doesn't mean nothing else, it means substituting some meals for juices.

3. Labels will do you in. In popular agreement vegan seems to mean a holistic approach to not using animal products for anything - no honey, no leather, no wool. Whereas a plant based diet is only eating plants without any judgements on wearing leather or wool. The purists are not interested in pesco vegan or flexi vegan. Apparently this gives them a bad name and makes it harder for them to argue their case. So unless you are 100% committed, don't even go there. Make up your own name. Personally I have no problem with honey or wool and I'm leaning towards eating fresh unprocessed fish rather than relying on foods fortified with artificial vitamin B12 or taking a supplement.

4. Environmental vegans have a problem most of them don't even know about. Crops grown on the scale we need to feed the world population need fertilising. The fertiliser used is either from animal waste or made from fossil fuels. Either way you're screwed. Otoh, show me a regular vegan (not an off-grid-living extreme vegan) who won't go on holiday by plane or even use the petrol it takes to run a car. So we're all making compromises just by living in the 21st Century. Get over it.

5. Plant based diets are all about health. There is very little scientific evidence (if any) that a 100% plant based diet is the key to good health. I firmly believe that a mainly plant based diet and cutting way down on (or even cutting out) processed sugar, dairy, added salt and chemically enhanced processed foods will vastly increase your chances of being healthy. I don't think a moderate amount of unprocessed meat, fish or eggs will harm you. I would also keep wheat down so not too much bread or pasta but ok to enjoy moderately. I'm basing this personal conclusion on a revisit to Forks Over Knives after being alerted to various ploys of mis-information used in the film. You can read a full critique here  but keep an open mind as this writer gets a little over enthusiastic in debunking everything that moves in the movie, some of which is legit.

6. Mis-information in Forks Over Knives. The original documentary is no longer available on You Tube but you can find the extended interviews which is all the 'science' without the cartoons. Here is the bottom line as I see it.

a. A western diet is not only a meat eating diet. The western diet is rightly (imo) blamed for bad health and specifically for conditions such as heart disease, type 2 diabetes, allergies, some auto-immune diseases, obesity, joint problems, some cancers, and much more. This is probably true and there is scientific research to back this up. However, they keep confusing meat eating with a western diet. Research that shows how a western diet that is detrimental to good health includes too much wheat (bread, pasta, and pastry), too much sugar, too much salt, and too much vegetable fat - all vegan and plant based. By interchanging the two terms they deliberately confuse and the conclusions make no sense.

b. The China Study. This study looked at the health of the population of China according to province. They found that the rural areas where a traditional rice based diet was eaten, resulted in the healthiest population. Where people had switched to eating a more western diet (although the doctors are being interviewed specifically about animal protein) they started to suffer from all the chronic illnesses and cancers that are prevalent in the west. What they left out was that the people in rural areas also eat some dairy, meat, and eggs in moderate amounts. Doesn't every farmer have a goat and some hens? They probably also eat less as they don't have access to fast food.They also forgot to mention that the western diet includes all the unhealthy stuff mentioned above. And that the industrial areas where the western diet has become more popular is also more polluted and the jobs tend to be more sedentary.

c. The doctor who saw the second and third generations of Filipinos in Hawai slide into ill health and obesity as their traditional Philippines diet was abandoned for a western diet didn't mention that they also ate a lot of fish in The Philippines and some meat. That the new western diet saw a switch from other grains to an enormous amount of bread, and an enormous jump in the amount sugar and salt being eaten. And the access to fast food as opposed to home cooked meals only which means they're eating far more. All crucial to the equation I would think.

d. The Norway Effect. There is a sensational graph showing how when the Nazis invaded Norway in 1939 they confiscated all animal livestock for themselves. Hardly any meat or dairy was available to the Norwegians from this time until the end of the war. The graph shows a drastic drop in death by heart attacks and stroke, and a dramatic rise once the war was over. The graph looks very dramatic but if you look at the actual numbers they have a scale of 20 - 30 on the y-axis and the actual number of deaths from these diseases fell by 6 or 7 deaths per 10,000 people. The article I linked to above made a big thing of only 6 people not dying from the change in diet which was annoying because there were 3,000,000 people in Norway at the time so the actual number was around 2,000 after five or six years of reduced meat and dairy diets. 2,000 people a year is not insignificant and worth further research. My point is - have you seen the amount of coastline in Norway? It is inconceivable that they did not continue to fish and eat animal protein from the sea. And again, the lack of food during those years means people just ate less of everything which has also been linked to better health.

So there you have it. This is what I've learned. I am very happy to discuss all the above in comments here or on fb but I bet (as is always the case) most of my answers will be - please read the blog post this point is covered. Serious discussion, observation, opinion, experience, and even correction, is welcome.