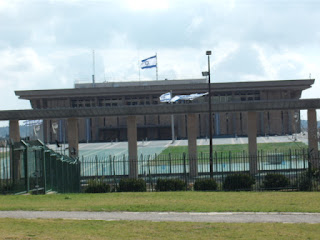 Yesterday was the third general election in Israel in 11 months. The problem is that we keep getting a tie and neither of the two big parties are able to form a majority coalition of 61 seats in the Knesset.

A relatively small party in the middle, headed by Avigdor Leiberman, could go either way as he's right wing but religiously secular. His main condition is that he also won't work with Bibi. He's the Kingmaker. Whichever side he chooses will get their 61 seat majority.

One good thing that came out of this election is that many of the very small, theme-park, parties didn't bother, or couldn't afford, to go a third round and many of the smaller parties joined together. For example, the Arab parties all clubbed together and will be the third strongest party in the Knesset. Usually there are a few parties that get one, two or three, possibly five seats and the left wing has to negotiate with all of them separately, or not bother with some of them as they're not needed. Now they have proper strength in numbers and real clout.

The woman I voted for last time, Orli Levi, didn't pass the threshold with enough votes for her social justice party. This time she teamed up with other left-wing parties and she will be in the Knesset. I'm pleased she'll be in because although I wanted to vote for her again. I couldn't bring myself to vote for one of her team mates. So the merging parties thing could go either way. Otoh, she was never totally committed to her team so she could be the defector in a Likud government - which would be a good thing. As she cannot change the overall leadership, she could at least be in the governement.

It's 08.30 on Tuesday morning. Exit polls are predicting Blue White to get 33 seats while Likud is expected to get 37. However, the left wing block is still bigger and they could form a government with 62 seats to Likud's 59. But if Likud do get 59 they could poach a couple of people form other parties by offering the defectors a good deal. And, imo, this is what will happen. Of course the exit polls are not the results. They are estimates. The final results will only be in on Thursday morning and here's why.

We don't have postal or proxy votes for ordinary citizens. Only diplomats, other emissaries, and the on-duty military are allowed to vote away from home. For everyone else, either you're here or you're not. They only count these votes if they will make a difference so they don't start until all the other votes are in.

This year we had special polling stations set up around the country for the 5,700 voters who registered as being in quarantine for the corona virus. These stations were outdoors (luckily the weather was good but there were tents in case of rain), the volunteers all wore hazmat suits, and the voters were told to come wearing masks and surgical gloves.

Last night the vote counters were refusing to count the corona votes but this morning Mada (Magen David Adom - The Red Star of David - our Red Cross) have agreed to count them. (Update at noon, the corona votes are being counted by senior election officials in hazmat suits in a tent.)

In other election news, general election day is a national holiday. In a country without Sundays (kids are in school 6 days/week although adults work only 5 days) and where half the country doesn't travel on Shabbat (Saturday) because of the Jewish sabbath, it is always a day to look forward to, to go out to nature parks or the beach, and to shop.

In Jerusalem there was free ice-cream at a number of ice-cream parlours if you produced a receipt showing you spent more than 20 shekels shopping. Of course they ran out of the free ice-cream quite quickly but you could still buy some as you're already here. No one was surprised.

The election campaign has been nasty and even Likud insiders said that their party was held together by hate. President Reuven Rivlin said he was ashamed that it had come to a third election because no one was prepared to work together. Then a friend wrote on facebook that outside her polling station one of the extremely right wing volunteers couldn't get his poster up so the left-wing volunteer helped him. Politics is politics but at the end of the day, Israel is more of a family than a nation.

P.S. And a 71% voluntary turnout isn't bad either.