Welcoming Shabbat In Lockdown From Our Balconies 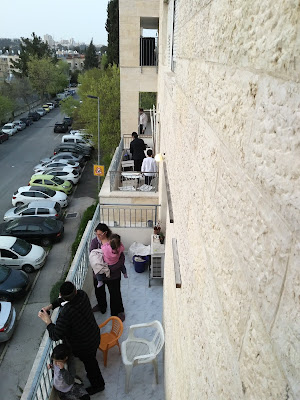 My neighbour Hagai called in the early afternoon. "We're doing the Welcoming Shabbat service from our balconies at 6.30. Can you spread the word?" Actually we have a building WhatsApp group so I sent the word (and asked for Hagai to be added to it).

You need 10 [men - grrrr] over the age of 13, for a full service and one of our neighbours is saying Kaddish (the mourners' prayer) after the loss of his father, so it was especially important for him to have a minyan (quorum of 10 men).

At 18.30 we all went onto our balconies and those without balconies stood at their front windows. The sun was setting. Chuck from downstairs, who is saying Kaddish, stood out front and counted the men. We had 10 but we were still quite spread out so some of the men from Entrance A came and stood spaced out on the road between Entrances B and C.

At the beginning it was a bit like the intro to The Brady Bunch when they're all in their own boxes looking up and down at each other. But as we they started to pray, it became more like a scene from a shtetl in 1800s Eastern Europe. I half expected to see the Fiddler on the Roof come dancing down the street. 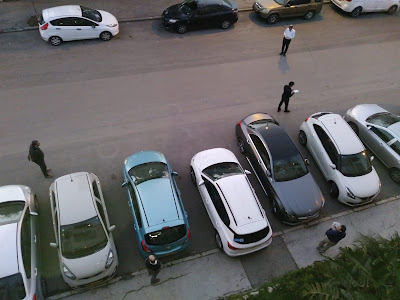 Chuck led the afternoon service for weekdays. Then Hagai came down and led the Welcoming Shabbat service. Finally the new tenant from apartment 4, Saadia, went down to lead the evening service for Shabbat.

Along the way, others who were walking past or had heard the singing from nearby buildings joined us. Some went back to get their prayer books as all passers by lived within the 100 metre limit from their homes.

It was very special. The last time all the residents met up without arguing over the building maintenance was when there was a fire in apartment 20 and we all ran out into the road, The time before that was during the last war when we all met up in our pyjamas in the bomb shelter. Nothing like a good crisis to bring people together. 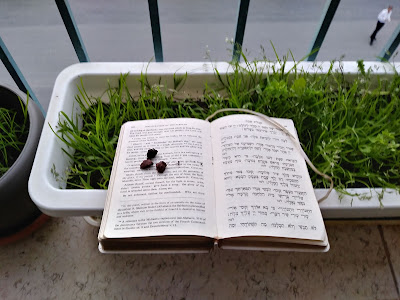 I took photos though you're not supposed to be using a camera on Shabbat. I didn't have the chutzpah to go down to the street and take a photo of everyone from below. (Which is why I could never be a journalist.)

Hagai asked who wanted to meet at 08.30 tomorrow for the Morning Services. He counted to see if they would have enough men. "We are three, Saadia and his son, Mendy, Oz, Michael.... where's Michael? Michael!?"
"I'm here, yes I'll be there."
"Chuck, Ivan, Brigitte's husband. Where's Brigitte's Husband?"
"He didn't come out."
"He went to a minyan around the corner."
"I'll be there!" came a voice from below me.
"Ok, I think we'll have enough. See you all tomorrow morning, Shabbat Shalom!"
"Shabbat Shalom!"
"Shabbat Shalom!" 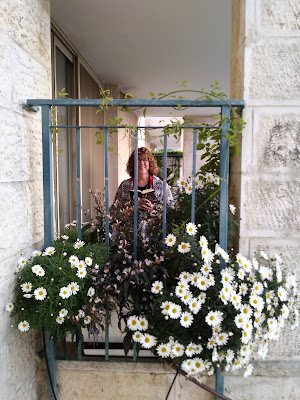 I shall sit on my balcony in my dressing gown, with a cup of coffee, reading my book, and generally soaking up the atmosphere. Now that's the perfect way to do synagogue if you ask me.

And if we're still in lockdown next week it'll be 18.40 on the balconies to welcome next Shabbat. 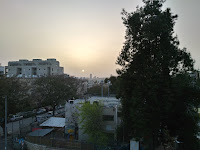