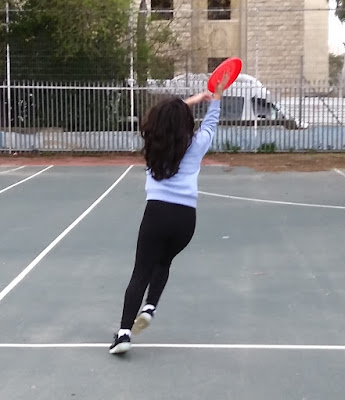 Although I've been out a couple of times this week to the bank and to the supermarket, DD hadn't left the apartment for over a week. She was quite happy staying in - we're an indoors sort of family. However, it's also been very cold and wet so the sitting on the balcony for a while every day, in the afternoon sun, to boost vitamin D wasn't happening.

This afternoon one of DD's friends asked her to go to the school with her roller blades. I also needed some fresh air and exercise so I went with her. DD's BFF was already there with her Dad and their dog. So they have to go out a few times a day to walk the dog anyway. The rule in Israel atm is that unorganised sport of no more than five people is allowed. And we are allowed to go for short walks in the nieghbourhood as long as we keep the 2 m distance.

Not only were we unorganised, we were disorganised as well so no rule broken there. DD and BFF went on their roller blades. The Dad had brought along a basketball and he was shooting hoops. I joined him. Not since school days have I played netball but I do remember that I liked being goal shooter best as I was ok at that - you didn't have to do much running.

It was actually fun. "Hey, this is fun!" I exclaimed. And a bit later as I chased the ball, "Hey look!, I'm running!" I know this is pathetic and I do keep meaning to get more active and fit but for the longest time I had bad knee problems - a bursitis and some other stuff. I couldn't run for ages but since then the knee things seem to have improved a lot.

Tbh, after a while shooting netballs did get boring but by then super-family had pulled out the frisbee. I took some photos of that while the dog took my place in the game.

Then it started to rain so we sheltered under the covered pergola, made some conversation phone calls, and went home. (Just kidding, of course we chatted.) We'd been out and active for two hours and here's the amazing thing.....

1. We felt happy and relaxed.
2. I served a late lunch and DD sat down and ate it all without a whole fuss about what she didn't like/want and what she wasn't going to eat.
3. For the rest of the afternoon we didn't have one blow up or even a tiny argument.

Obviously I knew the theory of this beforehand and I have tried to get DD outside during the week but she never wanted to and I didn't want her to come to the supermarket and bank with me, which were the only places I went to last week.

This coming week, we are so going for regular walks around the park.