1
Lag B'omer
I write about Lag B'omer every year but it happens every year so what's a blogger to do? This year the parents' committee for DD's class organized a bonfire for the civilized time of 5.30 - 7.30 pm. A list went out for the accompanying picnic and of course we were urged to bring any wood we could find to feed the fire.

The list is a funny thing. There are 30 children in the class and the items are all about 20 shekels (4 GBP) each so everyone is paying about the same. But the effort differs according to the item. For occasions inside school there are those mothers who like to bake so the cakes are no problem. There is a mad scramble to donate the disposables (plates, cups, cutlery, napkins, etc...) from those that can't be bothered have a busy week that week. The next to go are the bottles of drink which can also be bought in advance. The tubs of humus and cheese are also pretty popular. Pita bread is okay too though it has to be bought on the day to be fresh. What no one likes is the platters of cut up vegetables or fruit. It's expensive, it's time consuming and time sensitive, and it's hard to transport.

For Lag B'omer it was a felafel picnic. By the time I saw the list it had been up a good 20 minutes. Apart from the fruit and vegetables, the only other item left were 20 felafel balls (hot). I went for the felafel balls and thought myself very clever when I hit on the idea of ordering them from the felafel kiosk around the corner. Of course I was outsmarted by the other felafel mums (there were four of us). One of the mothers ordered 80 felafel balls, another picked them up on the way to the bonfire, and I only had to give her my 20 shekels, Sorted.

We went with our old wooden broom handle, an old chopping board that was going mouldy inside, a stack of paper supermarket bags, and some small raffia baskets. I felt a bit pathetic when I saw the already built bonfire set with real logs, shipping pallets, and whole planks of wood from I know not where. (And best not to ask.)

One of the fathers made a small fire for roasting marshmallows (another popular item on the list). I missed the bit where it said to bring your own partially cooked potatoes wrapped in tin foil but I don't think DD noticed them and anyway there were loads of spares.

Israelis know how to do all this outdoors stuff efficiently and I'm happy to go with the flow as long as it doesn't include climbing mountains.

2
Swimming lessons
DDs summer swimming lessons started this week. It's our fourth year and every year I'm amazed at how much better she is and how much more advanced the class is. I also found out after four years that the man who runs the lessons speaks English. I've been breaking my teeth speaking to him in Hebrew until now. I can manage in Hebrew but life is so much easier in English.

3
The Lion, The Witch and the Wardrobe
When we finished Heidi's Children I was dreading getting DD to agree to a new book. She hates change or anything new until she gets there, when of course she loves it. I was thinking of The Railway Children with the promise of seeing the film at the end.

However, on the evening of the final chapter of Heidi's Children, DD asked me, "Have we got the book about the children in the cupboard with a lion and a wicked Queen?" We do have it and I was delighted. Apparently they are hearing it at school in Hebrew and the teacher told them that it was an English book.

DD explained to me about how the children were evacuated to the country during WW2 and I told her about Grandma and Grandpa's evacuation stories. We're well into it now. Of course I have the full set of books in the series but I'm not sure I've got the patience to go through all of them like I did with Harry Potter. 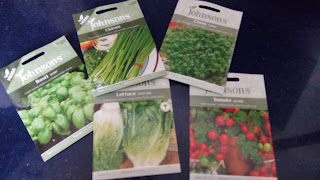 4
Seeds
My cousin,  who on her last visit brought us the lemon scented geranium cutting from her garden in Pinner, Middx, was in Israel for a visit. She came round for coffee  the other night and brought me some some seeds for a vegetable garden on the balcony. So I guess I really do have to do it this summer.

As usual I'm linking up with Michelle on Mummy from the Heart for this week's Reasons 2B Cheerful.