When Fairies Let Themselves Go

When we were in Hamleys in London we saw, in the dinosaur department, large eggs about 15 cm high and 8 cm across. Obviously they were dinosaur eggs but, in a large container with no packaging or labels, we had no idea what they did or what you were supposed to do with them.

A week later we were back in Israel and were invited to friends for the last day of Pesach - which happened to be Easter Sunday. This was a funny coincidence because my friend had bought and wrapped small gifts for each of the children and hidden them around the house for them to find. I'd like to say it was hours of entertainment but she lives in small flat so five minutes later they each came back with an egg. That was the funny coincidence - quite by chance my Jewish daughter went on an Easter Egg hunt in Israel on Pesach.

This time the eggs came in a box. DD's box promised us a beautiful Tinkerbell Fairy that we could hatch in three days and then that she would grow to her full size in a week. How exciting! The egg went straight into a bowl of water as soon as we got home.

DD rushed to check on it every few hours and soon (with a little help from us, I admit) the egg began to crack and we could see the beginnings of a baby fairy emerging from the shell.

Over the next seven days we watched her float out from the discarded shell and begin to blossom like a delicate flower balloon to the size of the Titanic. I don't know, maybe we fed her too much?

Here it is in pictures. 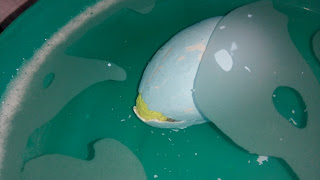 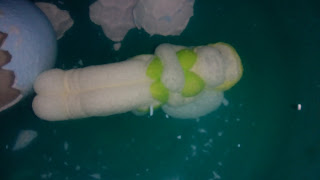 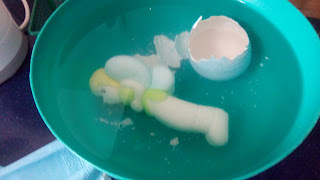 At this point we changed her name from Tinkerbell Fairy to Gudrun-Hildegard. Somehow it seemed more fitting. A lot of her size was down to was bloating and water retention  however. After a week in the healthy outdoors and sunshine, tending the plants, etc... she did slim down a bit and now looks heaps better.

Though not living up to her initial promise, I mean she doesn't fly or sparkle or anything and her wings don't actually open. And she still has the legs of a German peasant. Anyhoo, she has found some peace on the balcony amongst nature. I employ her on a zero hours contract as a scarecrow.  So far it's all working out really well. She seems happy enough. 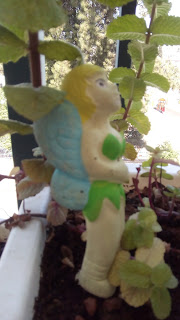 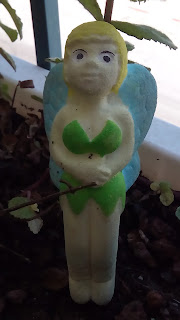 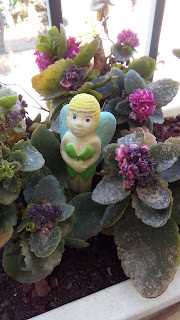 Email ThisBlogThis!Share to TwitterShare to FacebookShare to Pinterest
Labels: humour