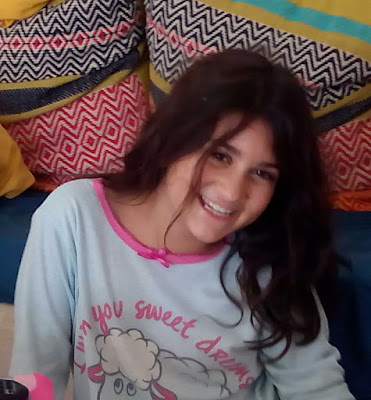 We're reading The Railway Children. I'm reading it to DD, a chapter a night. We usually both end up in tears over it - it's that sort of book. Or maybe we're that sort of people. Whatever, we're loving it.

I've borrowed the DVD of the film but I won't let DD watch it until we've finished the book. This is the rule for good books. I read the whole of Harry Potter to her - all seven books - before I'd allow her to see the films. It took from June till October last year.

This week I borrowed the DVD of Free Willy. When I told DD I had it she asked, "is there a book of Free Willy?"
"No."
"Phew!"

Anyway back to The Railway Children. We read the chapter about Perk's Pride and as I put the book down I mentioned that the next chapter is, 'The Big Secret,' which we will have tomorrow night. DD begged me to read just one page of it for a taster. So obviously I couldn't stop after one page and she got the whole chapter.

We learned what the big secret was but only Bobbie had found out. DD was desperate to know if she told the others. It was now 10.30 on a school night and I was definitely not reading any more or discussing it any more tonight, despite DD's best efforts to draw me in. I left her to make herself comfortable and turn off the light.

After I'd made coffee and pottered about a bit myself, I looked in on her to see if she was asleep. The light was still on and I marched in to tell her to it was time for lights out and no more messing about. I found her reading the next chapter of The Railway Children. "I'm on the sixth line!" she announced proudly.

I've been waiting for her to pick up a book, a proper book that is, and read of her own volition ever since I realized she could. I wrote a post recently about her being bored into reading but until now it has been easy chapter books of The Magic Tree House ilk. I quietly left the room with her still reading.

"I read a whole page!" she cried from the bedroom a few minutes later. And later still, "two pages!" The clock 'struck' 11 and DD called out, "I don't believe it! I'm at the end of the fourth page! I love reading now. It's getting easier!"

There are some things, no matter how often you tell them, they have to figure it out by themselves.

Finally I heard, "What?! I have another 13 pages of this chapter!" I suggested, "perhaps leave it for now and continue tomorrow?" I went in to see if she was heeding my suggestion but she was already asleep with the bookmark neatly placed five pages into the chapter.

I wasn't going to blog today as I didn't really have anything to write about. :~)