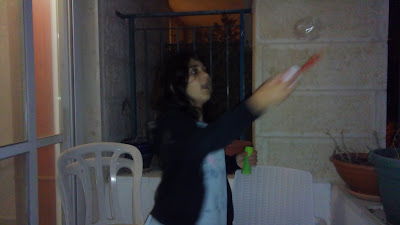 Today is the first day of Rosh Hashana which started at sundown last night. DD and I continued with our new (from one year ago) tradition of doing tashlich with soap bubbles. We sat on the balcony and blew away our sins and bad habits from last year and we promised to try harder for better habits this year.

I tried to capture the bubble blowing on camera but Rubbish Photographer struck again. Then we did some selfies which were equally rubbish but I posted a few on the right sidebar because DD is almost nine, not four as she was in the previous thumbnail. 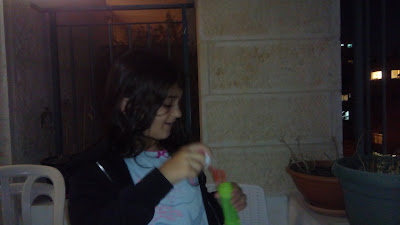 We ate some of the Rosh Hashana menu with symbols - salmon for a year of being sameah (happy); peas and sweet potato (afuna  and batata for akuna matata) to have no worries, fruit salad for dessert for a sweet year, and we drank our apple juice spritzers through the last two straws (the shop didn't have any at 1.30pm and no time to go to another shop) for a suck-cessful year. I wanted to make a salad out of a whole head of lettuce for the head of the year but the shop had also run out of lettuce.

We played Taki, Set and Kalooki until far too late. We have established another tradition that Friday night is games night. (I know it wasn't Friday yesterday but Festival evenings are similar to Friday nights.)

We got up late this morning - I felt bad about not going to synagogue as it's a small community which only exists because enough people do make the effort to go. We will go tomorrow as we're going to friends for lunch afterwards. And we heard the shofar blown (all 100 blasts) as the next door neighbours had private blowing on their patio. Then, throughout the morning as men came home from synagogue and blew the shofar for their womenfolk who had stayed at home - I''m guessing but there are shofars blowing all over the neighbourhood atm. I think we're covered.

Friends are coming here for an early dinner tonight. I took a big white fish out of the freezer and I want to make some sort of baked fish dish. I've never baked fish before (except for salmon) so I'm off to find a recipe.

I'm linking up with Michelle's Reasons 2B Cheerful on Mummy From The Heart.