The Eagle Of The Ninth 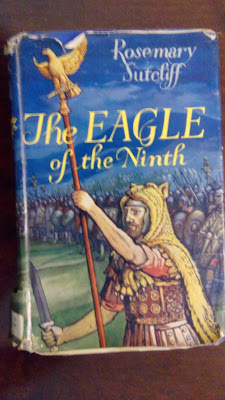 In English Literature for each term of each year in secondary school, we had to read and study one novel, one play, and a set of poems.

Some of the literature was great - not like lessons at all. Reading The Chrysalids started a life long (metaphorical) love affair with science fiction in general and with John Wyndham in particular. I never fell in love with Shakespeare but I was pleasantly surprised to find that it's not hard to understand. (Only in adulthood did I come to understand the genius of Shakespeare.) I unexpectedly enjoyed Jude The Obscure by Thomas Hardy. Less so The Mill on the Floss but I read it nevertheless. (George Eliot - I had to google it just now as I'd forgotten). I will always remember The Admirable Chrichton (though I never made the connection with Peter Pan at the time). And I was very relieved to be in the class doing To Kill A Mockingbird for O'level rather than Far From the Madding Crowd.

We read Jane Eyre and I'd forgotten the whole of her life before going to be the governess at Mr Rochester's place. It was only when watching a tv drama years later that I realized there was so much more to the book.

I thought The Importance of Being Ernest a bit silly and I refused to read The Trumpet Major - I don't remember who it was by and I don't care. A soon as I found out that our end of term exam was on the play not the novel I stopped even pretending I was reading it. (I couldn't resist googling it and what do you know? Thomas Hardy again! I'm surprised.)

The very first novel we were given to read in the Lower Fourth (Year 7) was The Eagle of the Ninth by Rosemary Sutcliff. It was the sort of novel I would never have chosen to read in a million years. It was, in my opinion, a boys' book. It was about the Romans in Britain and one particular Roman on a quest to the Highlands of Scotland to find the Eagle mascot/banner of the Ninth Legion that had mysteriously disappeared. Why they had chosen it in a girls' school was beyond me.

The first week's homework was to read the first three chapters. It was the weekend and I was finding it heavy going. We had English Lit. on Monday and I was still new enough and young enough in my school career to know think that it had to be done. I remember going across the road to play with my neighbour, Naomi, and my mother told me to take the book with me. At some point, Naomi went to watch something on television with her parents and I sat at their kitchen table and forced myself to read.

A miraculous thing happened during the course of that book. I got into it. By the middle I suddenly wanted to know how it ended. And the language wasn't too heavy or complicated. It was actually a pleasant read.

All this was in 1974. Jump forward 20 years and I came across a copy of the book in a clearance sale at The British Council Library in Jerusalem. I bought it because I remembered that I'd enjoyed it. I thought it would be fun to read it again, especially as I'd forgotten the ending, and most of the beginning and the middle. That was in 1994. Can you see where I'm going with this? It's now 2017 - 23 years later and I'd still not reread The Eagle of the Ninth.

However, I'd not removed it from my bookcase even after a number of book culls - some of them quite ruthless. So there was some commitment there in theory if not in practice.

Reader, this summer I reread it. It did not disappoint. I understand now why it was considered an educational novel for 11/12 year old girls in an all girls school with a ethos of academic and career achievement. Now I will pass the book on. I won't be needing to reread it again.