Pizzas, flatbreads, whathaveyou was the directive from Big Chief Recipeshed, a.k.a. Keith from Chronicles of a Reluctant Housdad. I never met a carbohydrate I didn't like so anything with cheese and dough has got to be a winner. I absolutely adore pizza and we have it (homemade and healthy of course *polishes fingernails on lapel*) just about every week. There are some fabulous pizza recipes on the linky and even a vlog. So with all the pizzas linked up, I obvioulsy had to go the flatbread route.

Sitting round bonfires is a national sport in Israel. We sing, tell jokes, smoke  and eat...lots. We do that whole Beduin role-play thing with black coffee in glasses and we make pita bread. Now the thing about campfire pita is, it's delicious - chewy, smokey, sprinkled with a bit of salt and za'atar (dried hyssop and seseme seeds). And the other thing is that it takes five minutes to make. You mix some flour, water and oil, make a dough, roll it out and fling it onto an upturned dustbin lid on the fire. When it's dry enough to start sliding off it's done.

When I see recipes for pizza dough with yeast that requires proving (or is it proofing?) and relaxing and waiting a few hours between each stage, I think of the campfire pita and want to ask, "why?" Ok, I know why. But I also know why not and here it is...

Friday being shopping day, this is what I found to work with: white cheese (I think it's the same as quark), flour and some olives. Later I added salt, pepper and olive oil. 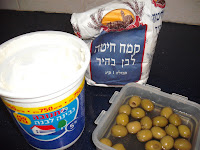 I put 2 heaped spoons of the cheese in a bowl with about 1 cup of flour, salt, pepper and some olive oil.
Then I formed it into a dough (adding some extra flour to make it malleable) and pressed it out into a round shape about the size of a side plate and 1cm thick.
I sliced the olives and sprinkled them over the top, folded in the edges like making an envelope, and pressed the dough out again (this time with the olives inside - clever eh?) back to the side plate size. 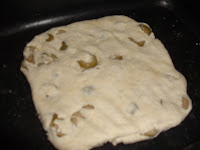 Into a hot oven for about half an hour et voila! 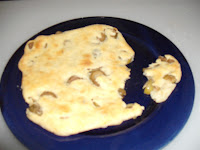 Honest verdict: It is delicious but it's not chewy at all. It's more like a soft cheesey pastry than bread. It would make a great pizza base though.

Email ThisBlogThis!Share to TwitterShare to FacebookShare to Pinterest
Labels: life in Israel, Recipes