My good friend, DancingInTheRain, is a career woman, a mother, a wife, a sister, a daughter, a friend to many, a writer, and a dancer. This is her story:
It was actually only the beginning of her story and we were left wondering what the impending test results were going be. Here's what happened next:

Take it step by step I was cleverly advised by other ladies who lumpect (LWL). And so on to the next step.  Radiotherapy.  Not that the previous steps were as straightforward as they sounded at the end of my last post.  ‘lumpected and then relumpected’ is what I wrote.  Well it would have sraightforward if they hadn’t actually lost what they were looking for.


But let’s not get ahead of ourselves. The first lumpectomy was actually 2 operations in one.  They start by injecting your boob with turquoise dye. This cleverly works its way into the underarm lymph nodes and stains blue one or two of those very lymph nodes which would have become cancerous if the cancer would already have spread.  They whip them out, test them on the spot for cancer and if all is good (remember, ‘negative’ in the vernacular) they sew you back up again.  If they think the lymph nodes are affected then they remove a whole bunch of them and start worrying about the rest of your body. Fortunately the lymph nodes were clear.


The second part of the operation is the removal of the lump itself.  After undergoing a weird and agonizing piercing procedure you enter the operating theatre with one, two or three wires sticking hedgehog like out of the affected breast.  The idea being that the surgeon digs inside and cuts out the diseased part which should be located between the wires. In my case, I think he was put off by the turquoise nipple because according to the pathological report of the removed specimen, there was still a bit left in.  All the invasive part had been removed but…. a bit of the high grade stuff was still there.  Tip: Good idea to remove all the ‘hg’ because it has a tendency to metamorphose into ‘invasive’ given time.


Well they had indeed warned me of a 50% chance that a re-lumpectomy might be on the cards.  What they hadn’t warned me was that although the pathology lab would diagnose any remaining cancerous cells after the first op, they might also, by mistake, grossly mess up the specimen.  Meaning that it simply wasn’t clear whether the bit of lump that was left was at the top, bottom or one of the sides of the residual hole.


The surgeon was somewhat at a loss.  Scalpel very much at the ready but not sure where to aim and not keen to perform a needless and totally unexpected mastectomy (full breast removal) in order to catch a few roving cells. Patient (me) certainly not keen to have a mastectomy just because the lab had made a mistake and ‘it might be a good idea to be on the safe side’.  Now was the time to call in reinforcements and the Heads of the Breast Oncological Department and the Breast Radiation Unit officially joined the team hunting for the elusive lump.  Tension was rife and the waiting seemed interminable.


The powers that be decided that an MRI scan should do the trick.  MRIs are uncomfortable and noisy and extremely claustrophobic – especially if you have recently had operations on your breast and underarm, not to mention a slipped disc.  Results indeed suggested the presence of unwanted cells and a re-lumpectomy was performed. Mr Surgeon and my dear Hubby ensured that the resultant specimen was delivered to a more reputable pathology lab (between them they smuggled the ‘body in the bag’ out of the hospital) and a long 3 weeks later we were informed that some pre-cancerous cells had been removed.  However, the high grade cancerous ones which we had been looking for were still lurking in one of the ducts.


And then they changed their minds.  A mammography scan would determine the need for a re-re-lumpectomy.  But after 2 painful operations there was simply no way that my sensitive, still-turquoise, distorted breast would subject itself to being squeezed mercilessly between 2 platters in order for the scan to take place.  The surgeon agreed with me and mayhem ensued – dissension in the ranks at the weekly departmental committee meeting.


Special permission was eventually given for 7 weeks of daily radiotherapy (with weekends off for good behavior).  With 250 daily patients, and the same number of personalized radiation treatments, it takes a while for the doctors, physicists and technicians to prepare each individual technical program which includes simulation sessions and tattoos.  One missed angle and the radiation hits your heart or lung - an unpleasant, long-lasting side-effect.  But the waiting was difficult.  It had been 5 months since the original diagnosis and I was becoming more and more scared that the detected, yet still unremoved ‘hg’ might that very minute be metamorphosing and invading. 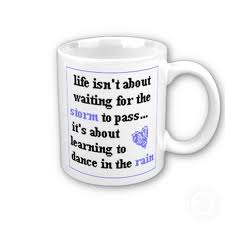 Now more than 5 weeks into treatment, although I am suffering the expected side effects of local soreness (imagine sunburn in a very sensitive place – ouch!) and extreme fatigue, the hospital team of doctors, administrators and radiologists are simply fantastic – not to mention friends and family who undertake the daily 1 hour+ journey to ferry me to the hospital – since the original slipped disc/degeneration of the old backbone is preventing me from driving myself.


Step by step is the mantra and, talking of steps, it is these same friends and family who have been there for me every step of the way.


I have an appointment next week with the oncologist. I am expecting only good news and will be dancing all the way there.  I’ll let you know……
DancingInTheRain
Posted by Rachel Selby at 1/07/2012 10:20:00 AM