This post is a Thank you Thursday to Lisa Gold Margolin who started a facebook group on July 31st. called: Help Me I'm A Mum In Israel In August -- Let's Plan Something. What a brilliant idea and it's working aswell. 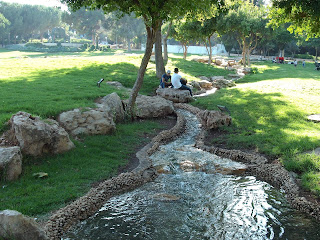 The first posts were full of suggestions of things to do. We have a difficult situation here whereby it's far too hot to go out before about 4pm and the younger children (who don't hang out in the a/c'ed malls) are going stir-crazy in the flats, unless you can get them to an early morning session in the park - yeah right, in my next life as Supermum. And yes, well spotted, most of us live in apartments so there is no flinging open (or sliding of) the patio doors for hours of outdoor activity while Mum cooks dinner. We have local parks with the ubiquitous playground climbing/slides combo and a patch of grass - but small and, to be honest, they get boring after a while.

And finally, there is a limit to what a 2yo can do and enjoy. 2yos don't need to go to theme parks or museums. They need simple stuff that doesn't cost much. It's just a matter of thinking of the stuff, finding it and - thanks to Lisa, posting it on fb so that a group of us can meet up there. 2yos do love company and so do their Mums. 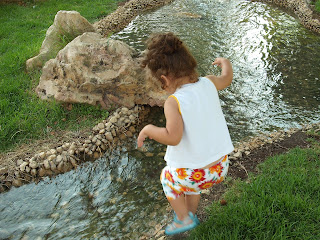 Today I was clicking my way round fb and twitter when I saw a post by J asking if anyone wants to join her and her twin boys in Independence Park, Jerusalem. Apparently (who knew?) there are streams and waterfalls (all manmade but who cares) to frolic in. Oooh yes please! I replied, completely forgetting that I had offered to have one of DD's friends for a couple of hours this afternoon. It crossed my mind to get J's mobile number before we left but I thought: no, let's be old fashioned and find them in the park.

I packed a towel, spare clothes, water jelly-shoes, drinking water, and snacks. We got on the bus into town at 4pm (which is when I remembered about DD's friend - sorry S and J). We went into the wrong section of the park. We sat there, not seeing any water nor any J and her twins. I called two mutual friends and managed to get J's number - but she didn't answer. I was about to take DD home when I suddenly thought: I know there is more to this park somewhere. So we left the small part of the park,walked round the fenced off bit where they are re-landscaping, down the road and into Independence Park proper. 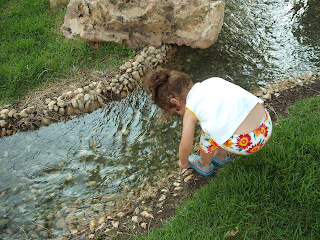 J and the boys had finished frolicking in the water and were on to bubbles and frisbie. DD didn't fancy paddling on her own but we took some pictures. The park is lovely. Plenty of shade, large grassy areas, water, trees... and it's on almost every bus-route. We said we'd organise it better next time. Warn people about the split parks phenomenon. Get a bigger group together. As J said - you need someone to do it first so they know what's what. Next time we'll be wiser. Those of you who commented: Let us know what it's like and we'll do it next week - very clever! On the other hand, we were out for a couple of hours in the cooler weather, had two rides on the bus and went to the supermarket on the way home. 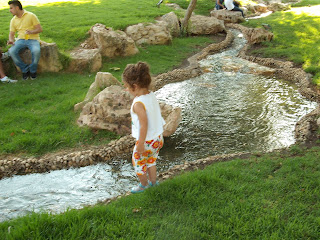 Email ThisBlogThis!Share to TwitterShare to FacebookShare to Pinterest
Labels: life in Israel, motherhood, Thank you Thursday