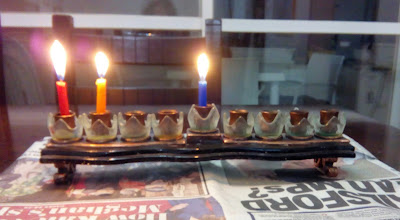 Tonight is the first night of Hanukkah as well as being Christmas Eve. We went to a Christmas concert in The Old City as DD's friend and her mother were singing. It was beautiful and warm and uplifting.

Afterwards we went for a walk around the Jaffa Gate. We saw Christmas Carolers and close by, a sound and light show on the city walls played Hanukkah music and a bit of Jingle Bells for good will.

Here are some photos from The Rubbish Photographer with the cheap smart-phone a.k.a Me. 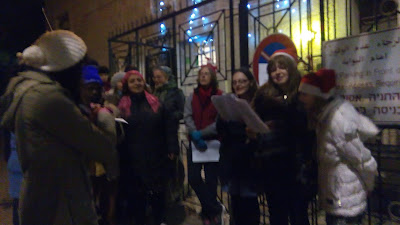 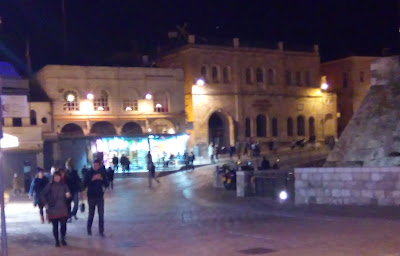 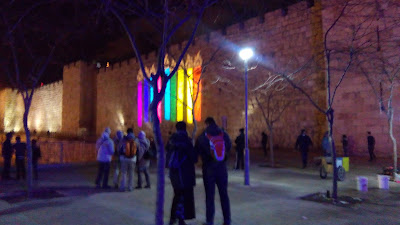 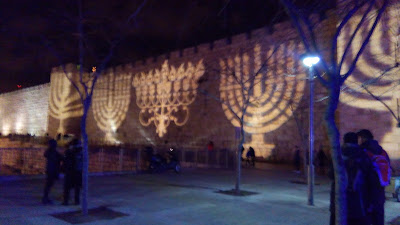 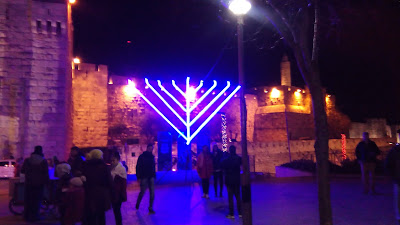 Today we had a big storm. No thunder or lightning but strong winds and heavy rain and hail. I was caught in one of those hailstorms that actually hurt. It's like being struck with millions of tiny pellets. The ground turned white for a moment before the hail stopped.

Last night there was an almighty crash at 12.36 am. My full length mirror had fallen off the wall and shattered all over the floor. The mirror was given to me by a cousin who left Jerusalem over 20 years ago to return to England. There she got married and has two teenage daughters in school. However, if you were thinking of coming back to Israel, Lucy, you''ll have to buy a new mirror as your old one broke.

We have given up pretending that DD sometimes sleeps in her own bedroom in her own bed. She's firmly in the other half of my bed for the duration (nights only). This means we only have to heat one bedroom unless she's playing in hers during the day. It's cosy and she's miles better than a hot water bottle.

Having got to the end of Harry Potter and the Half Blood Prince and with two weeks until Grandma gets here with book #7, we are filling in with The Little Princess. Last night we got to the part when her father dies and she is left a penniless orphan with no family at all. We were both sobbing. I could hardly get the words out. DD stammered through her tears, "why did they put this in a book? It's not fun! It's no fun at all!" I woke up with my eyes all swollen and red.

I made a big pot of onion, carrot, tomato and lentil soup on Friday. It's the sort of thick pottage that makes you think of selling your birthright (or tricking your brother out of his). I've been drinking a mugful of it with croutons each night. Tonight I had two mugs of soup.

I dedicate this blog post to 13 yer old Felicity Wilcox who was threatened with a lawsuit for using the phrase "Winter is coming" in a piece of artwork. Apparently HBO thinks it owns the words and phrases of the English language that it uses in its TV dramas. Well here's news for you HBO, winter has been coming for centuries. Eons before you even had the means to broadcast it to the masses, the masses already owned the phrase "winter is coming." Oh and by the way,......

Winter is coming (in case I forgot to mention it).

Email ThisBlogThis!Share to TwitterShare to FacebookShare to Pinterest
Labels: my issues, Winter is coming

The Kettle Sings And Other R2BC

Here are my Reasons 2B Cheerful this week.... 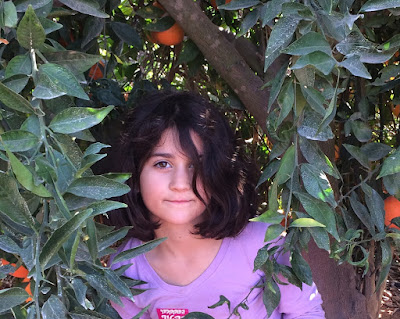 1
DD Is Eight!
We celebrated DD's birthday. Eight. In many ways unbelievable how the time has gone. I was going to write that it's flown but it hasn't flown - I feel like she's been here forever, it's just gone. And whilst no more baby in the house is a bit sad, it's also wonderful that we can do more interesting things together (more interesting for me that is), we're more mobile, and we're better company. I can only see these advantages increasing over the years. I can always find a baby to cuddle and then give back if I feel the urge. 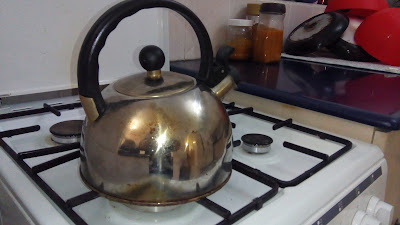 2
The Kettle Sings
My electric kettle broke. I accidently put it on for two seconds without any water in it and it fused the whole house. The electricity was fixed with the flick of a switch of course, but only if the offending kettle was unplugged.

I dug around at the back of the corner cupboard in the kitchen and found my old kettle from way back when. It actually sings when the water is boiling. I came over all nostalgic. There was something comforting, in a Mrs Bridges sort of way, about putting the kettle onto the stove over the flame. (I wonder if I'd have felt the same if I had an electric hob?).

Anyway, as lovely and cosy as it is using the old-fashioned kettle, it doesn't half take ages to come to the boil. Tomorrow I'm going to buy a new electric kettle and come back to the future where I live.

3
A General Contentment
I'm sitting here trying to think of a third R2BC because two isn't enough for a R2BC post. Not that there are any rules, but it just doesn't look right to stop at two. I can't think of anything specific except to say that there is an aura for calm and contentedness about me and my home that I've not felt for a long time.

Without getting too spiritual about it, there are times when you feel like life is a struggle and times when things seem to fall into place and feel right. I'm in a falling into place and feeling right phase. I've no idea what I've done to get here. I don't know what shifted and changed everything - although nothing has actually changed except inside my head.

Confused? Yes, me too but I'll have another week like this please.

As always, I'm linking up with R2BC which is on Lakes Single Mum this week, hosted by the lovely Becky.

Email ThisBlogThis!Share to TwitterShare to FacebookShare to Pinterest
Labels: Reasons 2B Cheerful 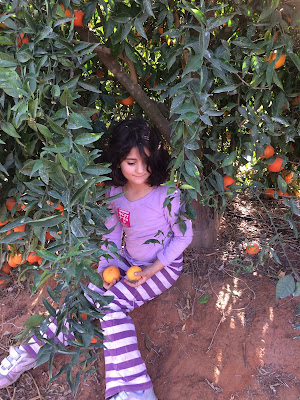 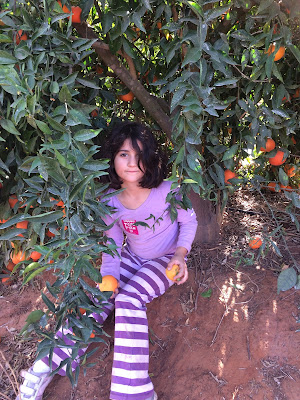 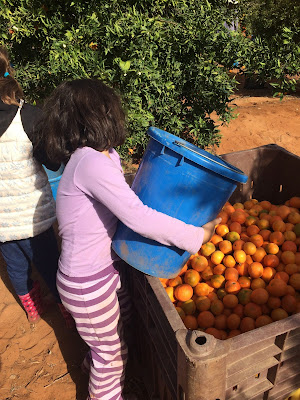