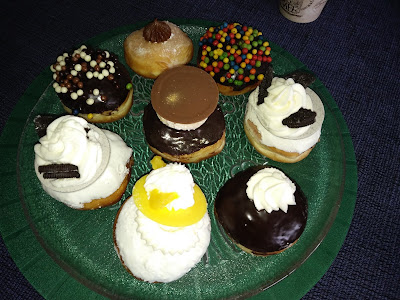 This is the last Reasons 2B Cheerful for a while. We're taking a month off for Hanuka and Christmas. I'll still be blogging though, and cheerful (hopefully). Meanwhile the linky is live at Michelle's Mummy from the Heart.

There's a school policy that most schools adhere to - if you make a birthday party you must invite the whole class or all the girls/boys. When we were told this in first Grade it irritated me and I argued against it in facebook discussions. 1. We have a small apartment (and a winter birthday). 2. It's expensive. And 3, don't tell me who I must invite to DD's party.

Over the years everything has changed. 1. The girls are older and 17 ten year olds is not the same as having 17 seven year olds to entertain. 2. We're not in that same financial situation as when DD was small and I had less flexibility with work hours. And 3, I get it now. If your child is the one who never gets invited to parties, you're very grateful for this rule. Israel still retains much of its socialist origins and the schools spend a lot of time on social cohesion and community building.

In reality, many children had small parties, quietly, usually in the holidays and the invitations were made individually. No one minded. And many parents took the other path - spend the money, hire a children's venue with an organised party included in the price (activity centers, chocolate workshops, entertainer, etc...), send an inclusive whatsapp to the class group and turn up on the day to your child's party. And leave at the end with no disruption to your own house.

We were in the first category and last year I took three of DD's closest friends out to high tea one day after school. It was lovely. In a previous year we had 12 children here for a pirate party in which I was the entertainer so we only invited the English speakers. And one year, in kindergarten, we had a Jewellery making party with seven guests, also English speakers. We usually have a tea with family friends and/or escape to London for a family celebration at my Mum's.

Just once in DD's primary school career, I wanted to invite all the girls to her birthday party. Especially as she has been to so many of their parties over the years. With our new tv and recently acquired Netflix subscription I saw a way to keep it simple. We invited all the girls for lunch and a movie after school on Friday (school finishes at 12 on Fridays). One message to the whatsapp and we were committed.

DD was nervous. What if they don't come? (13 out of 16 came.) What if they hate the movie and spend the whole time on their phones? (There was some phone activity but much of it was  multitasking as we all do when watching tv.) A couple of girls gave her a hard time at school, telling her that she needed to have an activity. I told her to tell them that it's lunch and a movie, take it or leave it. DD was concerned. I was cavalier. If they're bored they can call their mothers (they all have phones) and go home. It's not a disco boat. Most of them walk home themselves anyway. Trust me.

So on Friday morning I got up early and cleaned the apartment. I went out and bought 20 fancy doughnuts. I ordered 6 family pizzas. There was cold water from the fridge to drink as there was enough sugar in the doughnuts and pizzas. And I set the table with paper plates, cups and napkins. Sorted. The girls all walked home from school with DD.

The pizzas were late so we started with dessert. The doughnuts were a great success. I had meant to put some candles in them and have everyone sing Happy Birthday, but I forgot. We put on "The Parent Trap" (with Hebrew subtitles). Then the pizzas arrived and were also welcomed with enthusiasm. By the end of the movie all the phones were away and everyone was hooked. Result.

A couple of girls stayed to play after the party. I chucked all the used paper goods, washed up the three doughnut dishes, and threw the table cloth and hand-towels from the bathroom and kitchen into the washing machine. By 2.30 it was all over including the clearing up. It was the easiest party I've ever made and well worth the cost of the doughnuts and pizzas.

DD was happy and so was I. And Shabbat lunch will be leftover pizza and doughnuts.