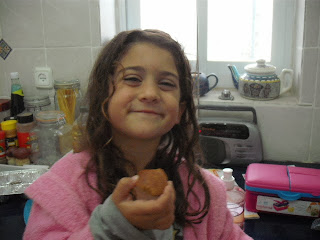 2
Me: Put down your tablet and come and get dressed.
DD: No! I already started a new game!
Me: Well turn it off.
DD: No, you can't stop in the middle of a game. We already learnt that. 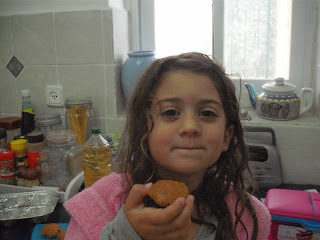 After the 5-day snow siege during which I had to negotiate with a 5 year old every time I needed my phone, DD got a tablet for her birthday...

1
Me: Turn the tablet off now, it's bedtime.
DD: Haven't you got any work to do on your computer?
Me: No, I've finished my work.
DD: I'm not finished on my tablet.
Me: OK, shall I do the dishes first and then you'll come to bed?
(I do the dishes)
Me: I've finished washing up. Time to go to bed.
DD: Why don't you sit down and have a cup of coffee for a while?

It snowed again on day 3. Today (Sunday) was day 4. No school as the roads were still icy but the sky was blue and we watched (from the window of course) the snow melt from this... 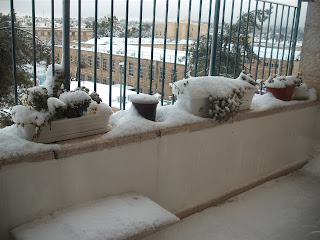 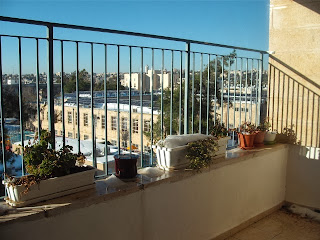 Whilst others were out building yet more snowmen and even some igloos (all seen on facebook), much of  our day looked like this... 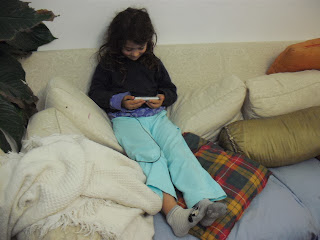 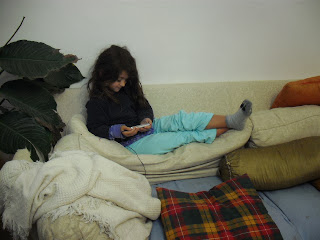 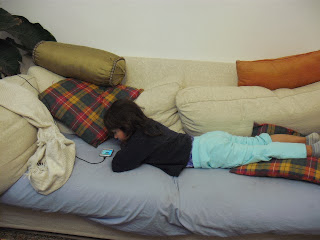 We got some invitations to join friends in various local parks and homes but I had loads of grading to do and I couldn't work and take take DD out. Luckily she wasn't too keen to go out in the cold anyway. Single parenting is like that sometimes.

And just when we thought it was all over. Due to freezing weather tonight turning the roads into ice-rinks, areas slightly further out and higher up than us being still covered in snow, trees still down and blocking, damaged schools, still no electricity in some neighbourhoods, and teachers not being able to get in from The Gush Etzion area south of Jerusalem which is still under a metre of snow and cut off... NO SCHOOL AGAIN TOMORROW! Day 5 - maybe we will venture out for a bit.

One other thing. With all the power cuts I was struck by the realization that in this era of smart phones, internet, instant communication, Skype, etc... you still need a torch and a battery operated radio in your house. And if I was thinking about doing away with gas in favour of an all electric cooking arrangement - this weekend changed my mind.

My 2nd Snow Day (With Photos)

No school again today but we, DD and I, had a grand old time exploring the great indoors. I made that soup, did 2 1/2 hours of grading, DD did her reading practice, I put laundry away and generally tidied up. Altogether a much more productive day than yesterday.

Challah recipes abounded on facebook as there were few challot to be had in the shops. We made do with two slices of bread.

Then, at 1pm, the electricity cut out.

For us, no electricity wasn't a such a big deal but you have to know what it means if you're doing Shabbat the orthodox way. You don't switch on or off any electrical, gas or battery operated appliances for the 25 hour duration - sundown Friday till darkness falls on Saturday evening. You have a hot platter to keep pre-cooked food hot, you fill a water urn for hot drinks, set the lights and heating on time switches, and often host guests or walk to friends for the big meals of the day (Friday night dinner and Saturday lunch).

Many friends packed up their food and duvets and went to spend Shabbat with friends in more 'enlightened' neighbourhoods. Of course you couldn't leave as Jerusalem was and is entirely closed on all roads leading out of the city.

On the radio we heard that great stretches of the country were without power for hours today. They said up to 40,000 people were without but they managed to connect 20,000 of those by Friday evening. Many roads around the country are closed and many towns completely cut off. We have now had over 30% of our average annual rainfall this week. The storm was much heavier than expected (it always is) and they didn't close the roads early enough (they never do). Over 700 people have been trapped in their cars for up to 12 hours.

Some of the motorists and their passengers were snow tourists coming from the centre of the country to take a few photos and make a snowman or two. Shelters have been opened in Jerusalem to accommodate them until Sunday. I bet that's the last time they go out of their way to see snow. *snorts quietly to herself*

Here at wimp headquarters we lit candles and put dressing gowns over our sweatsuits over our pyjamas. We played damka (drafts), Taki (like Uno), Junior Scrabble and solitaire on the computer until the battery ran out. DD got a bit longer playing Jelly Splash and Free Flow on my phone until that went dead as well. I heated up the soup on the gas and we dunked our bread.

Reader, I loved it.
The storm is still raging as I type.
And so to bed.


P.S. They say it will all be over by Christmas.

All week they've been talking about snow in Jerusalem and specifically on Thursday. All schools are closed when it snows even when the snow is 2mm thick and melts by 0830 hrs.

Wednesday 0000: It's freezing outside. I go to bed praying there won't be snow until Friday. I have a ton of grading to do and I need a whole day to do it.

Thursday 0530: DD woke up complaining of a tummy ache and promptly threw up all over the bed. My bed.

Thursday 0630-0700: Lie awake convincing myself that she's not ill but rather that she ate too much junk yesterday. Therefore there is no reason why she cannot go to kindergarten.

Thursday 0700: Still no sign of snow and I fall asleep.

Thursday 0800: I wake up and realize that DD is still sound asleep. I decide to let her sleep and keep her at home today. I get up to make the relevant phone-calls and see heavy snow falling outside my window. Get straight back into bed and go back to sleep.

Thursday 0930: DD wakes up, she still has a tummy ache and is sick again - this time in a bucket not in the bed. Lucky she's not at K. I'm sorry she's sick but it does cross my mind that we have the perfect excuse not to go out today.

Thursday 0945: Take out the washing, put in another load. Realize that we will need the heating on today (first time this winter), pull two heaters out of storage and plug them in. DD looks out the window and exclaims: Oh Mummy, it looks like Christmas!

Thursday 1000: I have coffee with oat milk, cheese and tomato on toast, and a banana for breakfast. DD has dry rice crackers and water. (Not everyone gets the Christmas they dreamed of.)

Thursday 1030: People are already posting pictures of their kids playing in the snow and building snowmen. I am now officially a SMOSK (smug mother of sick kid) as well as a SMOG (smug mother of girls).

Thursday 1030-1800: I spend the day discussing the weather on facebook, playing computer games with DD, watching videos and eating. At some point after it gets dark I light a couple of candles as the lights are flickering and others (on fb) have had intermittent power cuts throughout the day.

Thursday 1800: They announce no school in Jerusalem tomorrow. Hooray! They record the worst snow storm ever in Jerusalem in December. They announce that Israel has had 25% of our annual average precipitation this week alone - and it ain't over yet. Jerusalem is officially cut off from the outside world - all routes in and out are closed until 0600 on Friday. News report here (with pictures).

Thursday 1830 approximately: Have a huge and terribly mature revelation. I don't need to defend not going out to play in the snow. I love the snow to look at but I hate the cold wetness of being out in it. We will not be leaving the house for the duration. We're Jewish, we don't play out in the snow, we stay in and drink hot soup.

Thursday 2000: Put DD to bed. Read her three stories and come out to start my grading.

Thursday 2005: Realize that there's no way I'm doing any grading tonight. Mess around on the computer for another couple of hours.

Thursday 2200: Write this blog post. Go to bed promising to grade all day tomorrow. Oh, and to make the hot soup of course. 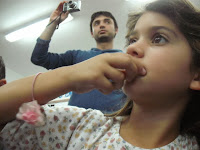 2
5 days after her 5th birthday, at Storytime in the library with a group  of little girls...

DD: Is everybody 5 here? 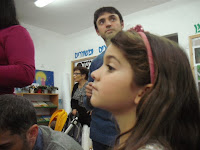 3
On wearing her wellies to kindergarten with slippers in her bag...
Me: Did you wear your slippers today?
DD: No I didn't hafted to, I just only kept my boots on all day.

4
On explaining why we don't have meat at home...
DD: Oh, so you don't mind it if the animals die on a farm... or in the zoo... you just only don't like it when they die in the fridge. You're right? 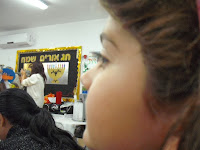 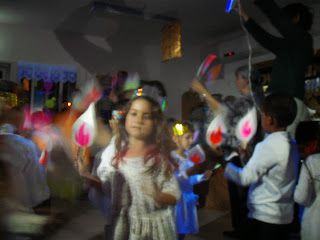 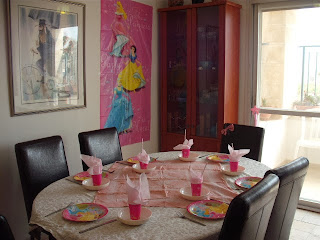 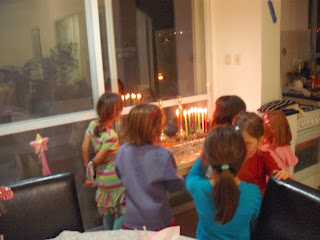 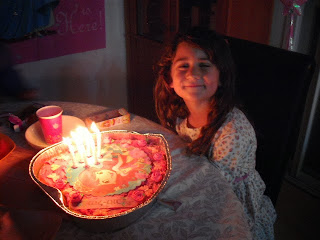 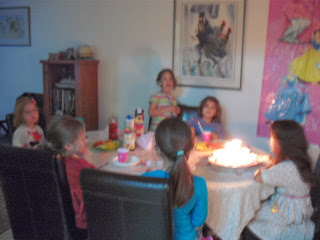 We don't actually do Christmas but doesn't mean I don't love the music. Linking up to Listography hosted at Plus 2.4 this week.

1. Calypso Carol. We used to sing this one at primary school. One of the ultimate feel good sing-along carols. Love it. Unfortunately the ultimate sing-along version cannot be embedded but this school choir is quite sweet.

2. Have Yourself A Merry Little Christmas. The Christmas holidays watching Meet Me In St Louis in the early afternoon, still in our pyjamas.

3. Do They Know It's Christmas? Not so jolly but what a great night that was back in 1984 and still an urgent message.

I know, I know it's only supposed to be 5 but I'd forgotten all about this until I saw it on Looking For Blue Sky. I've always loved it so you'll have to forgive a number 6 this time. Well it is almost Christmas so be charitable? Stop The Cavalry.