I wanted to link up to Recipeshed at Reluctant Housedad this week as the prompt is rice, pulses and pasta. Perfect for my vegetarian kitchen and I have wanted to experiment with Majadra (rice, lentils and fried onions) or maybe a veggie Kedgeree. However, what with the bad back and all, I never got round to it. I'm up to writing but can't get my head round the cooking and taking the photo. Then I suddenly remembered that I have a pasta dish in the oven. It's a total accident on all fronts - serendipity if you like.

Yesterday I made my usual pasta with frozen green beans thrown in to the water for a little healthy extra at no extra effort. But I was lazy and instead of cooking the pasta al dente and then adding a sauce, I threw in some sauce ingredients with the cooking pasta and let it absorb. Nice idea but you can't make a rissotto effect out of pasta and I ended up with mushy pasta which neither of us were thrilled about. Lots of it. 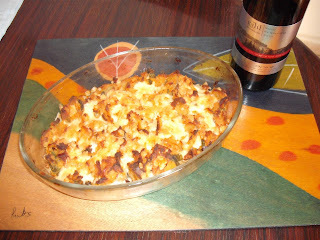 A word about Kugel. It's Yiddish for cake or bake. We use it to mean any base ingredients (noodles, potatoes, vegetables) seasoned, mixed with eggs and flour and baked in the oven. So I took my mushy pasta with beans, spiced it up with salt and plenty of pepper, mixed in three eggs and a couple of spoonfuls of flour, and put it in a hot oven for about an hour. when the top was all dark and crispy, I turned it over in the dish and chopped it up a bit. It was then returned to the oven for more crisping. Finally I sprinkled it with grated cheese and popped it back in the oven just to make sure it was absolutely dead.

I took the picture and voila - we have been picking at it all afternoon. Not what you'd put in your recipe book but just as good as nachos and cheese. And far better than wasting a whole pot of pasta.
Posted by Rachel Selby at 10/20/2011 02:48:00 PM