Well that went well - NOT. I'm beginning to see a pattern though. The festival of Purim is this weekend. It's the story of the Persian Queen Esther and the Wicked Haman. Just google it, I'm in no mood to elaborate except to say that it's Carnivale, Mardi Gras, a massive costume party and loads of fun. You'd think.

Just to bring you up to speed, this is what happened two years ago which ended in tears. Then this episode which ended in more tears. However, last year was fine and you can see how much fun we had here. So how did it all fall apart again this year just when I thought we were growing up?

DD has already worn her Minnie Mouse costume to kindergarten this week (and I forgot to take a photo) so for the Purim Party today  she chose to be Queen Esther. The choice was Minnie Mouse again, Queen Esther, a fairy (from last year) or a ladybird (we still have the costume from two years ago). She chose Queen Esther.

We've been talking about it all week. She could hardly wait to go to bed last night so she could get up and be Queen Esther this morning. And this morning she ripped off her pjs as I got the fabulous dress out. She stepped into it and POW! "ICKSA I DON'T LIKE THIS DRESS! I DON'T WANT TO BE QUEEN ESTHER! TAKE IT OFF ME!!!

Ok, lets do one of the others. She chose the ladybird. We put it on.
"WHY I HAVEN'T GOT ANY LONG SLEEVES?"
"The gloves have long sleeves."
"I NOT WEARING THOSE GLOVES AND I NOT WEARING THAT THING IN MY HAIR!"
"Ok, just the dress and the wings. Now let me take a photo."
"NO! NO PICTURES!"

I took out my camera anyway. It's a lot of work this festival - you prepare food parcels, have a big festive meal, provide costumes, have the children at home for three days.... And I didn't get a photo of the ladybird two years ago, or Minnie Mouse last week. I wanted my photo. I had accidently left the camera on movie mode so I actually got this:


So then I switched to portrait and got a photo of her running away down the corridor: 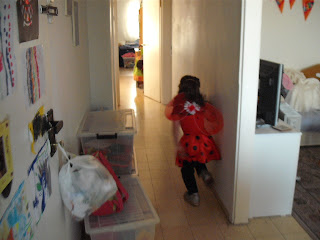 Then she came back in a temper and hit me hard on the boobs. It really hurt. So then I burst into tears, obviously, and we both left the house with red eyes and faces.
"WHY DIDN'T YOU BRING MY COAT?!"
"WHY YOU NOT MY FRIEND?"
"I DON'T LIKE PURIM!"
Me: "No me neither at the moment."


As I write this there are joyful songs blaring out from the school opposite like a Communist era park in Eastern Europe. My fb feed is full of photos of everyone's children dressed up and looking happily at the camera. I am trying not to grind my teeth. I used to love Purim.
Posted by Rachel Selby at 2/22/2013 11:08:00 AM