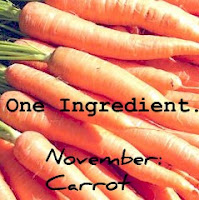 Yes folks, two badges today. This week's Recipe Shed is all about stews and casseroles. I thought I'd kill two stews with one carrot and link this week's kitchen fiasco to Working London Mummy's One Ingredient Cooking Challenge (there's a prize) for November, the one ingredient, always simple and family friendly, being the humble carrot. 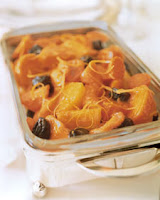 A word about tsimmes. Another traditional Jewish Ashkenazi (European) dish from out of the shtetl. This one is a favourite on Rosh Hashana (New Year) because of its sweetness (for a sweet year geddit?). What I never knew is that there are two types of tsimmes. The basic one is a baked concoction of carrots, sweet potato and dried fruits all glazed in honey or syrup. I'm not partial as I generally don't like the taste of dessert in my mains. However lots of people make it and love it. Here is Martha Stewart's tsimmes to show you what I'm talking about.

The other tsimmes is more like cholent. A sweet casserole of meat, potatoes, carrots and dumplings, slow cooked for many hours. I like this one better because of the potatoes and dumplings but I don't cook meat so what's a girl to do?

I call my version Not The Carrot Tsimmes because I make it more salt and peppery than sweet (although I do put a bit of sugar in it as it goes well with the peppery taste).

Cut into chunks - one aubergine, one onion, 4 carrots, and two potatoes.
Fry them over in a big pot with plenty of cooking oil, salt, pepper (lots), and ground cumin.
Add about 3/4 L of hot water with 1 heaped tablespoon of demarera sugar dissolved into it. 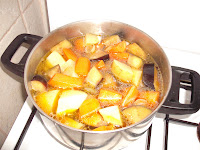 Bring to boil and simmer while you make your dumplings.


And now a word about the dumplings. I don't mean the oriental type which are wrapped parcels of filling. I mean the traditional floury balls cooked in broth or gravy. All my recipes called for binding the flour with suet (what we call shmaltz). I should have subtituted this with butter or margerine but I had neither so I used oil and made them far too loose. This meant that my dumplings all fell apart in the stew. On the one hand I didn't have any dumplings to serve but, on the other hand, my tsimmes had a lovely thick gravy. Anyway here are the dumplings just after I put them in and before they disintegrated. Notice the chopped fresh coriander inside. 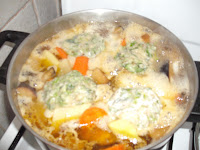 After finding your own dumpling recipe and adding them to the pot, let it simmer for at least an hour. Mine looked like this. 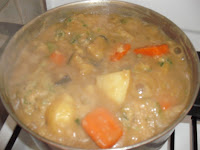 Adjust the seasonings to your taste. I added more pepper as I like it peppery with just a hint of the salt and sweetness coming through. I served it with rice. 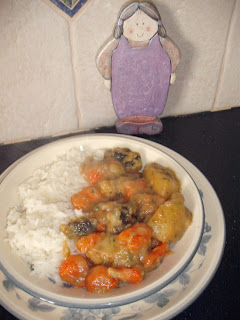 That's an effigy of my Grandma in the background who may have made propper tsimmes and who I'm sure would not be looking at my re-creation with pride. Oh, and unlike Big Chief Recipeshed, I forgot to sprinkle some more chopped fresh coriander over the top to make it look professional. Although they probably weren't that big on garnish in the shtetl.
And for my final confession - I picked out the carrots and displayed them prominantly for the photo as the One Ingredient Challenge (with a prize) is for a carrot recipe. Before I ate it for lunch I put most of the carrots back and picked out more potatoes and aubergine because I don't really like carrots that much. I hope I win :)
Posted by Rachel Selby at 11/24/2011 01:18:00 PM