Mugs I Have Loved

This week's Listography from Kate Takes 5 is strangely personal. It's a case of 'I'll show you mine if you'll show me yours'. So here are mine. I dedicate this post to past mugs I have loved. The best loved and most oft used are obviously the ones that don't survive. RIP


1. I was in Los Angeles in 1987 and my friend took me to the most amazing place - no not Disneyland, although we went there too, obviously. It was a Dollar Store. Of course we have Pound Shops now but back then I couldn't believe that this whole vast store sold everything for a dollar. I bought eight of these coffee cups. Two broke in my suitcase on the way home. Another four were faulty in that the handles heated up when the coffee was hot so you couldn't hold them. These two are perfect. $4 each in the Dollar Store. Who's the mug? 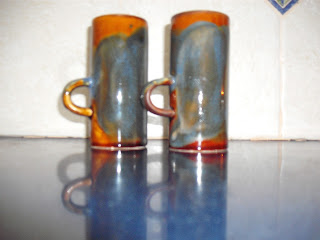 2. A good friend from New York stayed with me one summer. During her trip she went on a five day mini break to Turkey and bought me this set of six tea glasses with saucers and tiny teaspoons. Instead of coffee after dinner I love to bring out a pot of delicate herbal or green tea and serve everyone in these beautiful glasses. I try not to hate the guest who says, just as I'm about to pour, "have you got coffee?" And the other two who chime in with, "oh I'd rather have coffee too, if there is any," they will be a long time waiting for another invitation. 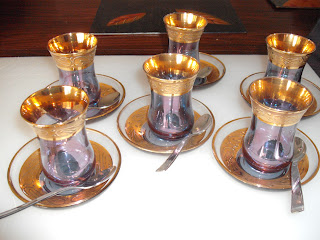 3. Two mugs that stack to make a multistorey tableau of roosters roosting. Silly really as they're only ever stacked in the cupboard with the door closed. If I take them out I'm unstacking them to use them. They were a gift but I could be tempted to go out and buy a dresser for several hundred pounds in order to display them. 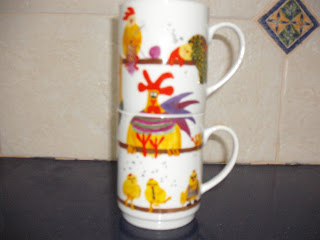 4. This one comes in three parts. The mug, the tea-strainer insert, and the lid that doubles up as a saucer for the strainer (with soggy teabag inside) when you remove it from the mug. Nice idea and very pretty. It was a present from a student at the end of the year. Did I mention how well it works? No I didn't. Nuff said. 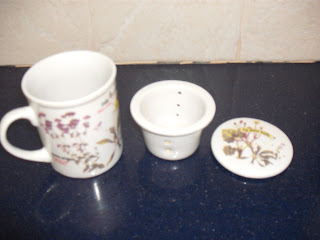 5. I taught these two young boys to read when they were seven year olds. Every week for two years we sat at one of their kitchen tables and had an English lesson. They bought me this mug at the end. That was 18 years ago as they're now 25 year olds. I still see them occasionally in the neighbourhood. 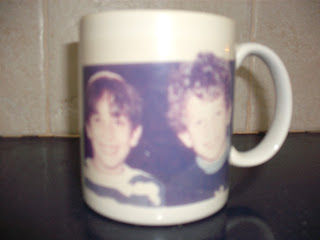