Half way through food shopping for the STOP-tober Challenge from Mortgage Free in Three. Here's the food bill lowdown so far.

The first week we spent 173nis (new Israeli shekels, about 31GBP). It was only the 3rd of the month so we were still eating food on last month's bill as well as planning to use the store cupboard to full effect. The second week only came to 137nis (about 24.50GBP).

However, this was not a typical shop.
1. I spent a bit more by going to the smaller supermarket around the corner rather than walking down to the cheaper Mega where I have a loyalty card. Sometimes lack of time wins out.
2. We bought some snacks for the journey when we go away and these are more expensive than what I would usually buy or eat.
3. This is only for half a week as we are going away for a week, eating mostly at my parents and sister.

On the other hand, I added three 500g packets of dried pasta to the store cupboard - 3 for 10nis on sale instead of over 5nis each. And I made four coffee jars of tomato soup to freeze using the leftover vegetables in the fridge, tomato puree and seasonings from the store cupboard - no cost. 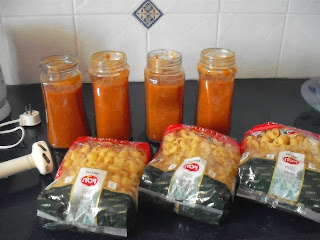 I've only spent 310nis (55.50GBP) so far this month out of the 500 (just under 90GBP) goal I set myself. It's only for 3 weeks' worth of food remember. Even if we eat out or buy snacks when we're away I'll include it in the holiday spending money which was already saved up and put aside.