Swinging From Trees And DD's Night Out 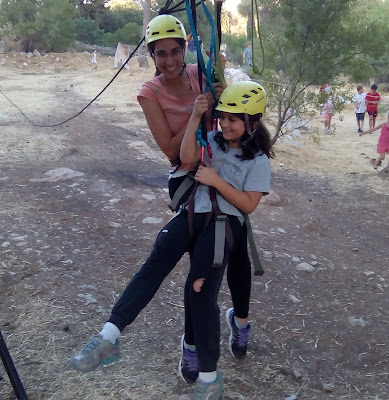 The Moonlight Movies starts tonight with Moana. DD's friend came for supper and they are going down by themselves. I told my visiting nephew that DD's friend is coming over for supper and then the two of them are going out to a movie on their own. Then I explained that it's outside our building on the grass and projected onto a white wall. We've been going down (or not) with varying degrees of success for the past four years. I am ecstatic that this year they can go themselves (her friend lives in the next road).

Another milestone passed last week was at the end of school class party. DD's class has a very strong parents' committee so they always plan something good. This year it was an adventure and team building evening in the woods. And best of all, they asked me to bring 40 ice-pops so no cooking or cutting up vegetables or fruit for me! They started off with some team building exercises. The one I could see and understand what was happening was where they stood on mats in a line and by passing the two spare mats from the end, up to the front, they had to walk the whole team forwards to the ropes.

Here's a story about me and ropes. I was once in the car with two friends on our way to go hiking near The Dead Sea. The driver shoved a book of trails in my hand and told me to pick one. "Number 4 looks quite good," he said. I looked at hike 4 and amongst the equipment listed was 'ropes'.

Me: We can't do this one, it says you need ropes.
Him: It's okay, they provide the ropes.
Me: No you don't understand. I don't do anything that involves ropes.

So DD's first rope activity was parallel ropes that climbed high into the trees and on which they had to edge along. DD got herself all harnessed up in the safety gear and helmet. She  climbed on the first rope, looked up, and changed her mind. 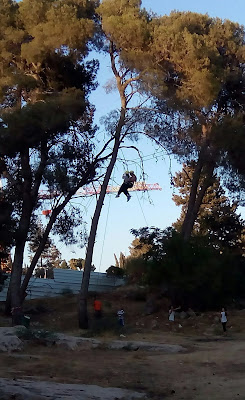 The second rope activity was a pulley system whereby two children were pulled up to the top of a tree (at a 45 degree angle) by their classmates. Then they were let go so that they slid down again at great speed. I was sure DD wouldn't do it.

However, she surprised me. I think she surprised herself too. By the time she decided she wanted to do it there were no more children left so she went up with her sporty teacher. Reader, she loved it.

The pop-ices went down well too. I bought the very big ones (that you're supposed to break in half and share with a friend) and put them in an ice box. We saved them until the very end when the food was long gone and the kids were all tired and sweaty from swinging through the trees.

So that's a sleepover, an action activity involving great height and ropes, and a night out with a friend sans adults, all in one week. I feel big changes in the air (if there was any air during this heatwave).