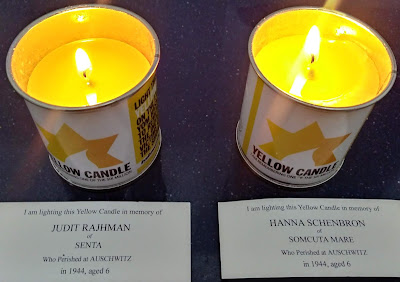 This evening, because we start our days from sunset, marked the beginning of Yom Hashoah - Holocaust Memorial Day. Everyone lights a memorial candle that lasts for 25 hours. Many people, including us, light in memory of a specific person who perished. DD and I lit our candles in memory of Judit Rajhman and Hanna Schenbron, both aged 6, both murdered in Auschwitz in 1944.

So many questions without answers. So many children who never got to live their full lives (estimated at 1.5 million, most of them Jewish). And their baby brothers and sisters, and their big brothers and sisters and cousins, and young adults, parents, aunts, uncles, grandparents, classmates, the children next door, the man from the grocery shop who always made jokes, the teacher who gave too much homework, the scary dentist and the kind doctor. And all these people's families and friends until you add up 6 million lives .... stopped. Quashed. Murdered. Gassed.

DD and I watched a film about Anne Frank and I told her how Otto Frank was the only one to survive and how he came back and Miep had saved Anne's diary. Then I told her how he went to live in Switzerland and he married another survivor, Elfriede (Fritzi) Geiringer, who had a daughter called Eva (The author Eva Schloss). Fritzi and her family had lived in the same street as Anne Frank in Amsterdam and Eva and Anne, born only a month apart, had been friends. The Geiringers also went into hiding and were also betrayed. They were sent to Auschwitz. Erich Geiringer and their 19 year old son, Heinz did not survive. After the war Eva went to live in London. In Stanmore in fact, where we also lived. "And Grandma knew her, and her daughter, Sylvia, went to my school. She was in the year above me, Anne Frank's step-niece whom she never met."