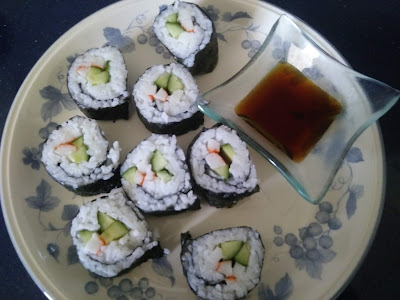 Here are my Reasons 2B Cheerful for this week. The linky link-up is with Becky on Lakes Single Mum.

1
We made sushi
DD loves the sushi from the very expensive sushi place near us. It's the equivalent of £10 for six little sushi rolls. So we decided to make it ourselves.

I bought the rolling mat, the nori sheets, rice vinegar, and soy sauce. We have rice and we have cucumbers. I'm nervous about using raw fish from the supermarket frozen section so I didn't defrost the salmon we have in the freezer. Nor did a buy very expensive fresh salmon or tuna for this experiment. Instead I bought the mock-crab sticks that one of the sushi-making videos on You Tube used.

I cooked the rice. DD was offended by the smell of the rice vinegar that you're supposed to add to it. Honestly, I only added a bit. She refused to even taste the mock-crab let alone put it in her sushi. I made mine first with the mock-crab. I took a nice photo and ate it. It was ok.

Then DD made hers with just cucumber and rice inside. First she rejected the soy sauce. Then she rejected her sushi rolls. She ate the leftover cucumber, took a packet of crisps, and that was lunch.

I ate my sushi, DD's sushi except for one roll, some of the leftover rice, and a couple more mock-crab sticks. Then I threw away all the leftovers including the rest of the mock-crab sticks which have the texture of the cheapest vegetarian hot-dogs with a slight fishy taste. Ugh.

You might wonder why I'm so cheerful about all this? Well, we tried making shushi and we can do it. It's easy. I now have the equipment and most of the ingredients. I'll try making it again with more vegetables inside including avocado when they're back in season. Or not.

DD has crossed this expensive (when bought ready made) item off her limited menu of acceptable meals. I think I've gone off it a bit too.

2
Meals with friends
It was the festival of Shavuot (Weeks, Pentecost, The Giving of the Torah) on Thursday night and Friday. Thursday night was dinner with friends. It was a small gathering as a nod to the restricted socializing guidelines. This was the first time I'd been anywhere besides the mini supermarket around the corner for 2.5 months. I am now so unfit that after walking home and up the three flights of stairs to my apartment I was totally puffed. This was probably also due to the amount of delicious food consumed and alcohol for the first time since March.

Yesterday we went to another friend for lunch. More good company and more delicious food.

After today's sushi, that's it. I'm not eating until Rosh Hashana (New Year) in September.

3
Catan
We love the game Catan. My nephews in London play it every Friday night after dinner with the whole family including Grandma. I wanted to get it for us here in Israel. I hesitated because to bring the English version back with us might limit the enjoyment for DD's Israeli friends. Even though the reading is minimal - just the knight cards and the development cards and you can get away with not even using them. Otoh, I'm not comfortable with the Hebrew version. Unless we don't bother with the knights or the development cards, but that limits the depth of the game.

Yesterday after lunch we played Catan at our friends' house. It was the Hebrew version and I was delighted to see that it has both English and Hebrew on all the cards and instructions. We are so getting Catan.

Email ThisBlogThis!Share to TwitterShare to FacebookShare to Pinterest
Labels: life in Israel, Reasons 2B Cheerful, Shavuot