A few weeks ago Emily from More Than Just A Mother asked: How many pairs of shoes do children need? I very quickly agreed with her that while their feet are still growing, a minimal number. I even commented and listed: one pair of everyday shoes (trainers in winter or sandals in summer); one pair of best shoes (for Shabbat and parties); Wellies or flipflops (depending on the season) and slippers. Four pairs. We both agreed that this was very reasonable.

However, whilst in theory this is what I am always aiming for, the reality has turned out to be quite different and I blame it all on the Israeli sales con technique. Instead of just reducing the price of each item, they seduce you into buying more than you need by offering either a bogof (buy one get one free or 1+1) or the second pair for half price. To be fair, this system does work nicely if you have more than one child, which most people do. But because of this DD now has 2-3 pairs of everyday shoes, 1-2 pairs of best shoes, 2 pairs of slippers and a pair of wellies that may or may not be too big.

First a bit of background. Last April we went to London for Passover and I found the most adorable plimsol type shoes in Sainsbury's reduced to 4.99GBP. I bought a pair that fit DD and she refused to wear them. Not put off (or just plain stupid) I reasoned that the pair that fit her now would be outgrown in a few months - so I went back and bought another cute pair in the size larger. Well at 4.99 it's almost rude not to. The first pair were worn once and I recently passed them on to a younger friend. The larger pair were worn twice but in the sandpit, put through the washing machine, and are going out to the dustbin today.

For our return journey to Israel I ditched the two pairs of worn out winter shoes as it was already summer weather here. DD flew home in her new everyday sandals and socks, like a real geek. Since then, apart from her flipflops which she loves, she's worn those everyday sandals every day for almost 7 months. See how clean the M&S best sandals look? There's a reason for that. 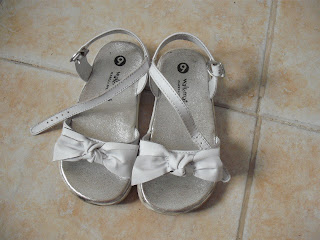 By July we had our two pairs of shoes for the summer (one of which was already out of favour) and so I really had no business looking at the summer sales. However, I had a brilliant idea. While the second pair was half price I should buy some trainers for September and get another pair a size larger for later. Her trainers from last year had been size 27, her sandals were 28. Obviously next year's shoes should be sizes 29 and 30. So this is what we got for 140 shekels (or 23GBP): 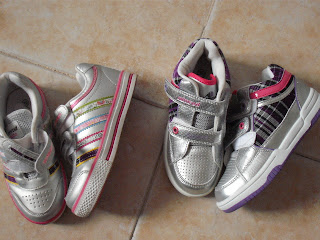 Fast forward to September and the 29s, on the left, were still far too big. Luckily it was still hot so we persisted with the now falling apart sandals. October sizzled in and out and even the first week in November was sandal weather. However, yesterday they predicted stormy weather and the 29s are still too big. So we went shopping... again.

Ingenious me had the idea to buy everyday shoes that could also look OK with a pretty dress on Shabbat so that when the 29s came into their own the new 28s could still be used for best. As luck would have it the 'Mary-Jane' shoes were bogof. So I bought one pair for everyday now (although strangely the 29s fit best in this design), and one pair of nicer best shoes for when we go to London for Passover next year (also 29s but far too big for some reason). Another 140 shekels. 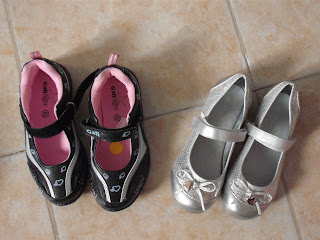 On the way out we saw the wellies. 99 shekels but the second pair are half price. We have about four days of welly-weather here during which you really need those wellies but you certainly don't need two pairs. Yes I could have got another pair in a bigger size for next year (another 50 shekels) but this was getting ridiculous. They told me I could have something else for half price instead - a top or trousers. I looked half-heartedly but we really don't need any more clothes (thanks to very generous and slightly older friends). They almost got me, I admit. I almost spent another 40 shekels on something we didn't need just because it was marked 80. Thankfully I came to my senses. The shop assistants thought I was crazy - which just goes to show the local mentality and why these scams work. 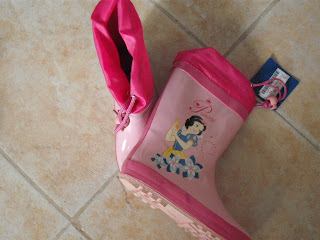 Did I mention that the wellies may or not be too big? Well the 29s fit so snuggly it would have been a shame to buy them. So I opted for the 30s in the hope that they'll last us two years (that's about 8 wearings). I hope she'll manage in them this year with thick socks and maybe a tissue or six stuffed into the toes.

Oh, and the icing on the cake? This morning it was indeed cold but DD insisted on wearing her old, scruffy sandals with socks, like a real geek. That's about 60 quid's worth of new shoes in the cupboard (one pair of which actually fits) and we're not wearing any of them. Grrr.