Obviously I had my matza brei on Pesach (Passover) but I was so out of the blogging loop that I forgot to take photos of it. Can you believe that!?

Before leaving Jerusalem for London, I had had to buy a packet of matzas for DD's mock seder at kindergarten. Also, I rented out the apartment here during Pesach. So when we returned there was a fair amount of leftover matza in the cupboard. I managed to get through most of it with butter and/or cheese. Maybe one or two with butter and jam. And then I was down to the last three slices. I took the opportunity to return to matza brei so that I could share it with you because it's one of life's pure pleasures and, for many of us, the ultimate comfort food. 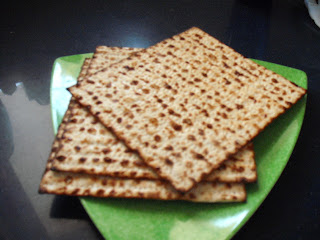 Method
1. Run your matza under the tap for 3 seconds to wet them but don't make them soggy.
2. Beat the eggs, milk, salt and pepper in a bowl (like for making an omelet).
3. Melt the butter in a frying pan.
4. Break the matza up over the pan and drop the pieces into the hot butter. Stir and fry over for a minute. You may have to add lots more butter.
5. Pour over the egg mixture and cook like scrambled eggs.
6. Turn out onto a plate and add more salt and pepper to taste. 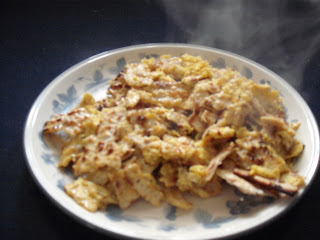 Variation
There are those who prefer their matza brei made like an omelet and they may even season it with sugar like a pancake. Others can't resist adding fried mushrooms or onions to the mixture but, imo, you can't improve on the basic pure matza brei. I would advise you not to play with the recipe.

Invitation
I invite those with different matza brei experiences to add them in the comments below.