After The Fast - Dedicated To Ari Fuld z"l 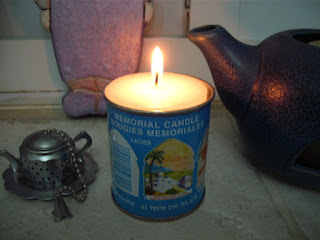 Today was Yom Kippur, the Day of Atonement. On this day like on no other day of the year, the whole country shuts down. All places of work (except for hospitals and the military) and entertainment are closed. The airport is closed. The streets are clear except for the occasional police patrol or an ambulance. Children who are not synagogue-goers take advantage of the lack of traffic and ride their bikes on the roads. I've written about it before.

After a long day of introspection, prayer, and atonement, we put the old year to rest. We contemplate how we can improve ourselves and our behaviour in the coming year.

There was a lot to think about today. Last week there was a tragic terrorist attack in a community nearby. Almost all my friends either knew Ari Fuld, a 45 year old father of four children, personally or knew someone close to him. For a while many years ago I was in a women's group with his mother. Jerusalem and indeed Israel, is like that. We are all connected.

Many of my friends said it made them appreciate the present. Ari's close friends urged everyone to be like Ari - a man of action, a doer. He was outspoken, yes, but for the truth. He was a teacher, a soldier, and a leader. CCTV footage shows that after he was stabbed and before collapsing, Ari ran after the terrorist and shot him as he was chasing his next victim, thereby saving her life and potentially more lives after that. His daughter quoted Ari at the funeral: "If your life is too comfortable you're doing it wrong."

At just after 7pm today the shofar (a hollowed out ram's horn) is blown for the last time and we finish introspecting and have to start doing. Of course we have to break our fast first. And then we should start as we mean to go on.

The first deed after Yom Kippur is traditionally to build your sukkah - a temporary booth in which to sleep and eat for the upcoming seven-day festival of Sukkot. As I sat at my computer tonight I could hear the bang bang bang of many hammers as a number of sukkot were being erected in the garden behind my building.

I was at the computer and finished grading all my Summer Course papers to date. DD prepared her school bag for tomorrow, showered and washed her hair, and read a chapter of her book all without prompting, to show that she was already making good changes.

I will try to be more of a doer. I will stand up for the truth as I believe it. Neither agreeing with those on the extreme right nor the extreme left of most political and religious issues, but finding the middle road with the best possible outcome for the most people. I will continue to support strict security measures and harsh punishments for terrorists whilst not blaming every member of their race or religion.

In keeping with the words of Rabbi Zushya, I can never be an Ari Fuld, but I will try to be a better Rachel Selby.