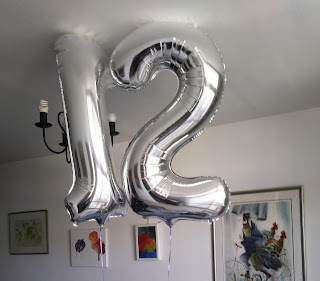 It wasn't what we had planned by a long shot. However, a series of intimate events, which by their size hardly warrant being called events, turned out to be fun and ticked most of the boxes.

DD's class capsule (bubble) of half her class meet up in the school playground once a week for an activity. It's her first year in middle school and after two months of remote learning they realized that some students knew nobody in the class. The outdoor lessons, though educational, are primarily a social exercise to help them make friends.

I secretly arranged with the teacher to bring in cupcakes and chocolate milk for their mid-morning break. I was given permission providing all food items were individually wrapped. DD was horrified when I turned up with the treats on Wednesday morning, about an hour after she had left home. "What are you doing?! Stop!" I left them to it as their break wasn't until later. A very happy DD called me on her way home.

On Thursday evening we invited four friends from primary school to a pizza and dessert (more cupcakes) party. I disappeared into my bedroom and let them get on with it. The first half hour was spent zooming with the three friends who were avoiding indoor gatherings (and one who had moved to America). It was a great success and we promised to do it again (without cupcakes or gifts) as soon as the covid situation is over. Or in the park when the weather is more predictable.

On Friday we recieved fruit platters from my sister in London and from a group of my friends here in Israel. And a bouquet of flowers, fancy chocolates and helium balloons from my sister-in-law, also in London.

A friend and her daughter came to stay for Shabbat. We spent Friday night after dinner, playing Perudo and Rumikub. On Saturday morning we went to a Bar Mitzva in the morning and returned home in the afternoon for lunch and more board games.

On Saturday evening we zoomed with the family in London.

And finally, we have six guests coming to light Chanuka candles with us on Wednesday evening. This isn't strictly Bat Mitzva related but they were supposed to come for brunch on the Friday morning of the Bat Mitzva and DD's actual 12th birthday but two of them were in quarantine and another two were preparing for their Bar Mitzva the next day. The other two were staying for Shabbat so we postponed the brunch until Chanuka.

As the shopping malls have opened this week, we are going shopping for clothes one day this week. I told DD she can have whatever she wants. After all, despite the temptation, it wouldn't be fair to use the whole of the Bat Mitzva fund, which I've saved up over the past two years, to pay my council tax and building dues for 2021.