We were going to go to the library this afternoon as we missed our regular day yesterday. The library is on the way home from nursery so we hadn't gone out of our way when we discovered that it's not open on Tuesday afternoons. Then on the way home we bumped into a friend who told me they were giving out gas masks at the local shopping centre which is 10 minutes walk from our house. We've all had gas masks since the first Gulf War in 1991 but they've taken them back, re-issued them once and then taken them back again a few years ago. I honestly don't know if they take them away when they become old and then re-issue with updated versions, or if it's to do with the security situation and preparations for war. I know we are on high alert at the moment because of the general instabilities in the Middle East. Whatever, I suppose I'd rather have them than not.

So after a quick stop for toilets, filling our water bottles, dropping off the library books and grabbing an ice-cream in a cornet, we set out to get our gas masks. DD kept forgetting what they were called:
"What are we buying?"
"We're not buying anything, they're giving them to us."
"How do you call them?"
"Gas masks."

We arrived at the mall and waited only two minutes in a short queue. I gave them my identity card and we were issued with these. 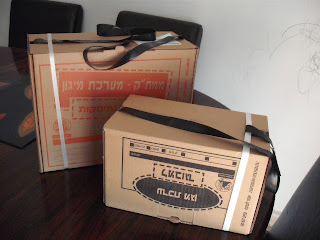 It was then that I realised I had no idea what to tell my 3 1/2yo about these mysterious boxes that we had collected and were taking home. We had the following bizarre conversation:
"Mummy, which one is mine?"
"The big one is yours and the smaller one is mine."
"This is mine?" (patting the larger box)
"Yes, that's yours."
"Can I open it?"
"No."
"I want to open mine."
"We can't, we're not allowed to open them."
"We're not allowed to?"
"No."
"When we get home we could open it?"
"No, we can never open it?"

I could tell she didn't believe me but I changed the subject. We rode on the little carousel of horses(which only costs 30p a ride instead of the whole pound it cost in Edgware). We had supper at the kebab place (big chunks of chicken breast on skewers and chips for DD while I ate the pita, hummus and salad that comes with it free). I was very proud of myself for not giving in to Burger King even though it woud have been cheaper probably.

After supper we decanted the rest of DD's orange drink into her water bottle and bagged the uneaten chicken and chips to eat later. One more ride on the horses and we walked home. All in all a very successful outing - except that we went to get gas masks. I spent the whole walk home trying to think of something to say if DD asked what the gas masks were for. I couldn't think of anything.

Once home DD had a tantrum because, as I suspected, she was sure she would be able to open her box when we got home. 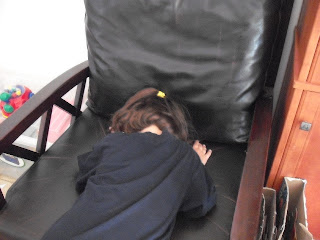 Eventually I settled her in front of a dvd with the remains of her supper. Not the healthiest supper I know but those chunks of chicken are much better than a McBurgerKing hotdog. and the chips are real chunks of fried potato rather than reconstituted fake fries. 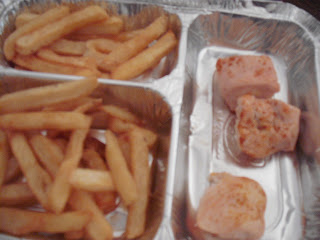 In the end DD didn't ask what the gas masks were for. She's accepted that the policeman said we're not allowed to open it. ("No, not even next week." "No, not even on Shabbat!") Tonight when she's asleep I'll hide them under the bed and hope she forgets all about them (except she won't as she's got the memory of an elephant). I think the answer is probably to go and collect your gas masks without your children as there really is no explanation suitable for a young child.