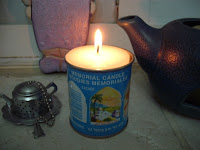 This morning I paid a shiva call. That's how we say it for some reason. In Jewish families, when someone dies the funeral is held as soon as possible - same day if it can be arranged. There is dignity in this. The Muslims do it too. I will always remember how Dodi Al-Fayed was laid to rest while Princess Diana's body was shlepped up and down the country from place to place while a million people came out to watch and even (why oh why?) to look at the body.

Then the spouse, children and siblings (and parents if necessary - God forbid) sit at home for seven days on low chairs while anyone who knows them or the deceased pays a condolence visit. This is called shiva which means seven and also sitting.

Apparently it's an exhausting week but it serves many purposes and is a comforting process. Obviously there is the spiritual side of honouring and remembering the deceased, reciting special prayers, lighting a candle, making a symbolic rip in your clothing and wearing that item all week, and eating certain foods on returning from the funeral.

There is also the worldly side. For a week the family stays together and are surrounded by friends. There is much talking about the loved one, the family, the past, the recent past, how you feel, anything else, everything else. Talking is good. And the whole thing is so exhausting, apparently, that you don't have too much time to dwell and get too depressed. Before you know it a week has gone by that possibly could have been the hardest week to bear.

Every shiva is different. The best case scenario is a bunch of middle aged siblings celebrating their parent's long and happy life. Other shivas are  more sombre. And some are downright tragic. A friend who had to sit shiva for her father with a mother she didn't get on with, in her mother's home a continent away from any other family and friends remarked wryly, "You don't always get the shiva you wanted."

Sometimes the family imposes visiting times to give themselves a rest and space to eat. Sometimes people come late and overstay their welcome too far into the night. When my father was sitting for my 89yo grandfather, one of the great-aunts started looking purposefully at her watch as the clock struck 10. It had been a very long day, she was in her 80s herself, and she'd had enough. When that didn't deter the few die-hard talkers, she went and got her coat and hat, put them on and returned to her chair. That did it, within a minute the room was miraculously cleared.
"I'll drive you home Aunty," said my cousin.
"Not yet," she replied removing her coat, "Let's have a cup of tea first."

I meant to write about today's shiva but I don't want to add it on to the end of a post that has already rambled on for too long. I'll write about it tomorrow. I have things to say.