Every School Should Hear This

Today Jon Pritikin spoke to the children at DD's school. 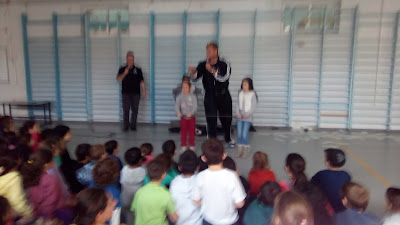 As an imspirational speaker, Jon is indeed inspirational. He spoke in English to about 200 1st - 3rd Grade pupils who mostly don't understand English and you could have heard a pin drop. Obviously we had a translater who said everything in Hebrew sentence by sentence. I was wondering if this would work as kids get bored waiting sometimes. But honestly, they were enthralled throughout the whole assembly.

Jon starts by doing stunts of tremendous strength and telling us how he's in the Guiness Book of records (2009 edition, page 12). He's funny and engaging and the kids loved it. 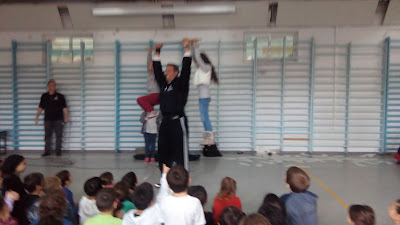 For each stunt he asked for volunteers and the first boy he chose happened to be an English speaker which was funny as this little boy answered the questions before the interpreter could translate. After that the kids were all putting up their hands and shouting out, "I speak English! I speak English!"

Once all the children are lapping it up and totaly engrossed in the performance, Jon tells the story of a kid in America who couldn't speak, couldn't read, had no friends, was teased, bullied and laughed at.... you get the picture. A kid who everyone gave up on, even the teachers. And most tragic of all, a kid who believed them. A kid who accepted that he couldn't have any friends, he couldn't play with the other kids, he was stupid, and everyone hated him.

Right at the end Jon reveals that the poor kid with 'no future' is himself. By that time the teachers and parents who attended all had tears in their eyes. The children were wide eyed and opened mouthed. 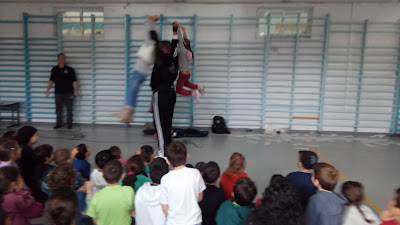 Then came the messages and a pact. The first strong message was to not let anyone tell you that you can't succeed in life, or that you are not special. "Everyone here is special and you all have your special reason for being on this earth."

Simple messages but so cleverly delivered and so poignant because of who delivered them. I know this will stay with the children for a long time. As a teacher myself (although not in this school), I will also carry his messages with me and I wished every school child could see and hear Jon Pritikin.