Over the years I've amassed enough dishes of all shapes and sizes to allow for any possible entertaining event. I could feed 100 people out of the serving dishes I own. The plates would have to be disposable but the serving bowls and decorative dishes would suffice.

There are pieces remaining from sets long gone, inherited pieces, dishes that came as a gift filled with homemade biscuits, dishes bought at craft fairs or on holiday, the discounted last of lines, the pretty dish in the supermarket or IKEA that was so cheap it would have been rude not to buy it....

What happens to this vast collection of lovely bowls and dishes? Nothing. They sit in the display cabinet or in kitchen cupboards and waste their infinite lives waiting for their big moment that rarely arrives. And though I do try to rotate the dishes I use on the odd occasion when I do entertain, I usually end up using the same dishes every time.

So I'm giving some of my dishes a career change. 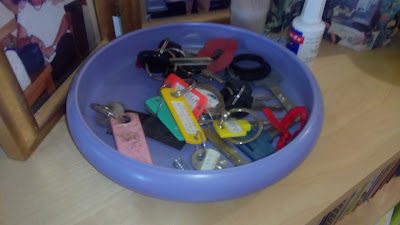 The space on the bookcase next to the door where I throw my keys and therefore has become the official key place (even for keys I've forgotten what they were for) now has a pretty dish in which to keep the keys. This dish was always problematic as it was a gift and I never knew if it was ovenproof or not. I'd have liked to bake small pies in it but ended up only using it to serve the humus. Now it's used and seen all the time and has an altogether more fulfilling life. 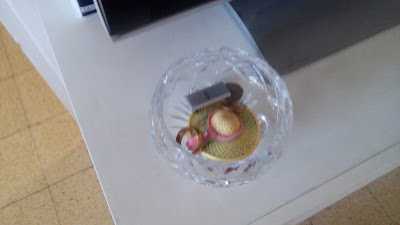 Who doesn't have a corner where counters from boxed games or Lego/Playmobil bits get deposited until you have the time to put them away properly? And how many times do those things get lost again before you've got around to taking them to where they really belong? Most of the times in our house. So now a little crystal glass bowl that my parents bought for me in Malta sits in that corner in front of the television and collects Lego pieces, lone beads, buttons, counters, and any other small item making the long journey home.

Of course everything should be put away completely the moment you touch it. But we're not like that. Realistically we need the dish for lost things. In it's previous life this dish sometimes came out after dessert filled with squares of chocolate or nuts to nibble while we drank our coffee. Unfortunately, by that time in the meal I was so exhausted that I'd usually forget about the coffee completely. Now I get to appreciate the beauty of the Maltese crystal glass all the time. 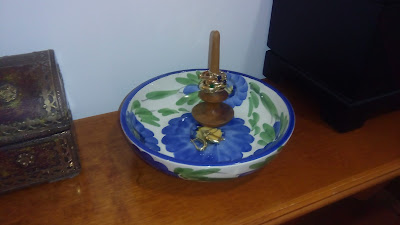 A pretty dish to hold trinkets on my dressing table. I had an old wooden ring-holder and small wooden bowl but a decorative china dish is so much more sophisticated don't you think? 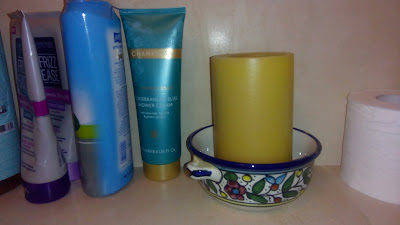 The thick candle in the bathroom that stood on a black candle-holder plate is now prettily dished in Armenian pottery. We almost had a disaster last week when a candle dripped off its stand and all over the toilet below the shelf it was standing on. Had it been in a dish the wax would have been contained. 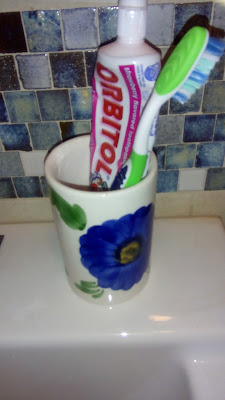 Who says that pencils and paperclips have to be stood in faded cardboard pencil holders? I'm thinking of a small cream jug of the right size and shape that would look great on my desk (when I get my desk back from being the temporary dining table).

Toothbrushes and toothpaste in a china cup. Why did I buy these? Because they were in a closing down sale, they cost next to nothing and they are pretty. I have four of them but the thought of drinking water out of them is not appealing. So now DD and I use one each in the bathroom and I have spares for guests.

And finally (for now because I'm on a roll with this) what could this possibly be (below)? I received it as a gift from work about eight years ago. It's glass and they got a box of them very cheaply so they gave them out as Rosh Hashana gifts, because you have to give your employees a gift on Rosh Hashana. It's meant to be a wine cooler and was so irrelevant to the people it was given to that it was almost insulting. No one I know puts wine on ice. We take it out of the fridge and put it on the table for goodness sake.

But it's sort of attractive. I thought of putting a plant in it but you need to find a plant in a pot that's tall enough and I never got around to it. So it's been sitting around for eight years taking up space and being useless. 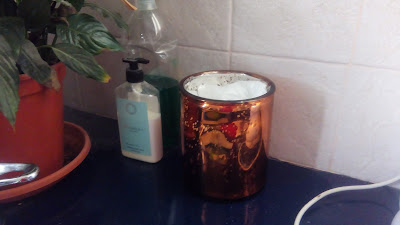 This week DD's school announced the grand opening of their new composter to feed their own vegetable garden. We were asked to keep our vegetable waste and bring it in to school for the composter. So inside that wine cooler is a plastic bag filling up with our vegetable peels, pips and cores. I close the bag when it's not in use to avoid any smell in the kitchen. I like composting, it makes me feel virtuous.
Posted by Rachel Selby at 11/16/2015 08:21:00 PM