Reasons 2B Cheerful At Home And Away

I've missed two weeks of Reasons 2B Cheerful as we were away for the Pesach holidays. We were staying with my Mum in London where three of us competed for shared one computer. There was also far too much good television to watch and a whole Daily Mail was delivered to the front door every morning (a real paper one, with no clickbait like they use online).

Anyway, we're back and just as we started to catch up with our lives, a whole load of new stuff was thrown into the mix. I'm reminded of that fridge magnet that says: I try to take one day at a time but sometimes several days all throw themselves at me at once.

Here are some Reasons 2B Cheerful as I battle my way through the 'To Do' list:

1
London
We spent two weeks in London with family and friends. As usual we didn't rush around seeing everything but rather had a couple of outings and lots of hanging out. There may have been some clothes shopping involved.

DD and I went on the London Duck. I'd never heard of this tour until I read about it in my 6th graders' English textbook where there is a unit about London. It was a lot of fun. The tour guide was very amusing although the jokes went right over DD's head. As we went into the water however, she started laughing away when he showed us the MI6 building on the South Bank of the Thames.

DD: He's very funny isn't he? Everyone knows spies are only in stories and films. Hilarious.

2
Into Summer
Summer has officially started. I know this because DD went to school in shorts this morning. That makes it official. There's no going back now. Hot days for five months from now until October. I'm cheerful about it now but of course I'll be yearning for cold weather by the middle of June.


3
Photography Exhibition
My friend Yael Katz held her first photography exhibition yesterday evening. It was so impressive that it deserves a whole post to itself. Watch this space, it's coming soon. 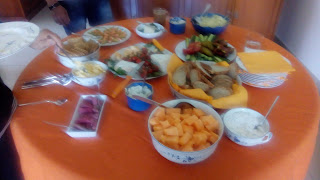 4
Catering
My friend had her annual visit to her mother's graveside accompanied by close family and friends. After visiting the cemetery on The Mount of Olives, they return to the house for a breakfast. Obviously this isn't the reason to be cheerful but my job is to stay at home and set out the breakfast. And I love preparing food and setting it out. I was singing away to myself as I cut up fruit and vegetables, arranged cheese and dips on platters and chose matching tablecloth and napkins. (S - Sorry for being so happy on your mother's yarhzeit but please think of it as me helping to celebrate her life.)

I'm linking up to R2BC over at Becky's Lakes Single Mum blog.