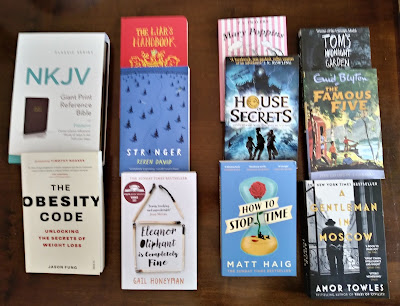 What could be a better reason 2B cheerful than Book Week? It's not an official Book Week like Israel's National Book Week, or Jewish Book Week in the UK, or the Hay Festival (which I would love to go to one day).  It's a private Midlife Singlemum Book Week because I always return from London with books.

English books are very expensive here. In London Amazon Prime really does deliver the next day and we also like to visit a big Waterstones (preferably Hatchards in Piccadilly as it looks and feels like something out of Harry Potter).

1. The Bible
Of course I know the stories from the Old Testament and some others that I've heard second-hand through teachers and discussions around the dinner table. But I've never actually read the Bible - the whole thing. Thirty years ago Rabbi Donniel Hartman told a group of us that he realized this too, one year, and he read the whole thing from cover to cover.

I decided to do the same - a chapter each week corresponding to the portion we read in the synagogue each week. I started with the beginning of Genesis every year for about 10 years and never got further than Joseph going down to Egypt. Part of the problem was my Bible which had both Hebrew and English in the tiniest print and the most old fashioned language.

So I bought a Bible. With big print. And if I'm already buying the Old Testament, I should really read the NT as well. My mother and I both said how we regretted skipping Scripture lessons at school just because we had a 'Jewish' pass. (There's a lot I regret about my education but that's a whole other discussion.)

2. The Obesity Code by Dr. Jason Fung
I've been watching Jason Fung on You Tube and I joined a facebook group of his followers. You can listen to 10 hours of podcasts which read aloud the whole book but I prefer to read it myself if I'm going to 'read' the whole book. Despite hours of Fung interviews and lectures - you need to read the whole book to really understand why he has cracked the obesity code. I did read this book last week. Folks, throw away your calorie counters, it's not about Paleo versus Vegan, and it's not about low or high fat/carbs/protein. If you want to change your life and get healthy - buy this book.

3 & 4. The Liar's Handbook and Stranger, both by Keren David
I've read everything by Keren David - one of my favourite YA authors. Here is my review about a previous book of hers. I was missing these two books so I ordered them. I've read Strangers - review to follow but .... fabulous!

5 & 6. How to Stop Time by Matt Haig and Eleanor Oliphant is Completely Fine by Gail Honeyman
There was a sale of two books for £5 so I chose two books. Obviously.

7 & 8. Mary Poppins by P.L.Travers and House of Secrets by Chris Columbus and Ned Vizzini
We went into Waterstones and I remembered that I wanted to read the original Mary Poppins. Apparently the original book is far more sinister than the musical lets on. Having seen the film Saving Mr Banks, I'm intrigued. And while we were there, DD chose The House of Secrets. I told her that it looked very scary and she probably wouldn't like it as she wouldn't let me read past the first page of The Wolves of Willoughby Chase for that reason. But she really really wanted it and when your nine year old daughter really really wants a book, well obviously you have to buy it for her.

9. Tom's Midnight Garden by Philippa Pearce
Grandma gave this to DD for her Afikomen present at the Seder. (The kids hide a vital piece of matzah without which you cannot finish the seder, and refuse to say where it is until they are promised a present. Or the parents hide it and the kids find it and withhold it, depending on your custom. We do it both ways - one for each of the two nights.)

10. A gentleman in Moscow by Amor Towles
A friend recommended this book to me and I was intrigued so I bought it.

11. Five go off in a Caravan by Enid Blyton
We didn't buy this one, it's part of the complete boxed set that DD got for Chanukah. We're bringing them home a few at a time but I particularly wanted this one as I remember something that I want to check - to see if they changed it. I'll let you know.

Eleven reasons 2B cheerful and reviews to follow. I'm linking up with R2BC which is back with Becky at Lakes Single Mum for the month of April.

Email ThisBlogThis!Share to TwitterShare to FacebookShare to Pinterest
Labels: Books, Reasons 2B Cheerful