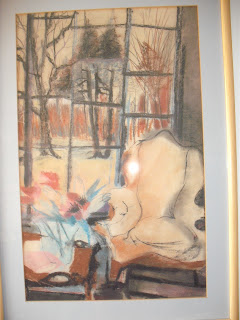 I admit I chose a provocative title. No the Rabbi is not nude. And there isn't even a nude in the picture - but so many people think it is a nude when they glance at it for the first time. And it did belong to a Rabbi. Here's the story:

About 20 years ago a friend of mine was studying in Jerusalem to become a Rabbi, before returning to the UK. He and his wife rented a flat from a man who was going to sell it after their two year contract finished. Meanwhile he sold them all the furniture in the flat and they could do what they wanted with it before they left. This picture was on the wall.

It is drawn in pastel crayons and is signed Levin '57. I looked in the Artist Database of the Israel Museum but couldn't find any reference to this artist. I even had a friend called Levin in Jerusalem who was an artist, but it wasn't hers. 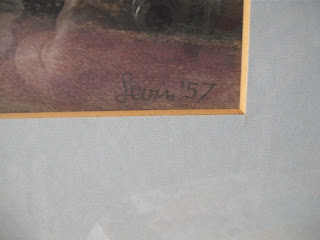 I first saw the picture on the Rabbi's wall during a Friday night dinner that I was invited to. I commented that it was quite a risque subject for a rabbinical student to host on his wall. He laughed, "it's a chair," he said.  I loved it. "It's yours when we leave," he said.

When their daughter was born and we went to have a celebratory drink, my parents were visiting so they came too. I pointed out the picture to my mother. "That's coming to me," I told her. "Is it'" she said flatly in that way only mothers of a certian generation can express disapproval. "It's a chair," I said.

Here's a sideways view - can you see the nude that isn't there?

The original was framed in an old fashioned, ornate and falling apart frame and the passe-partout seemed to have been cut with blunt scissors. I had it reframed. It now sits above my sideboard which, very soon, is going to change from being part of the playroom back into a grown up sideboard. Soon, very soon. (And the bike is going downstairs to be used outside only - as I said, very soon.)

Email ThisBlogThis!Share to TwitterShare to FacebookShare to Pinterest
Labels: Art I Heart, life in Israel