Yesterday I started the story about the Friday Night Blessing I give my daughter every week right after lighting the Shabbat candles. You can read it here. I wrote about how I arrived at this particular blessing and about the friend who gave it to me. This friend has always been into doing the cryptic crosswords in the paper and enjoys a regular weekly scabble game with friends. In short, she's a word puzzle person. So it was no shock to learn that her father had been one of the codebreakers at Bletchley Park during WW2.


Jump back (or should that be forward?) to Easter Sunday in rainy London. DD and I were staying with my sister and her family for the Passover holiday. As Monday was a bank holiday, that was the day we were going on our Matza Ramble. In the old days this meant a ramble in the countryside including a matza picnic (as we only eat matza instead of bread for the week of Passover). We tend to go with other families so that the children (and we) have friends to play with. And over the years, we've become less rambling and more National Trust. In recent years we've gone to Greenwich, Hatfield House, and Knebworth.

It was almost cancelled this year as the weather forecast was heavy rain throughout the day. As phonecalls were exchanged, bowling and a movie were suggested. DD is three so I was seeing our day out with the family rapidly disappear. Another suggestion was everyone come over with board games and we'd have a games day. I couldn't see DD playing Risk somehow. Luckily someone came up with the idea of Bletchley Park - lots of indoor interest and a bit of outdoors if the sun came out.

I was so excited. I wanted to look up my friend's Dad. We have a personal connection to him after all. When we arrived, I realised that I only had his surname and there were two Goldbergs listed. I happened to have my friend's daughter's number in my phone so I texted her in Israel: At Bletchley Park, what's ur Grandpa's name? Two minutes later I got my answer: Joshua David Goldberg. He's in the Japanese Room. 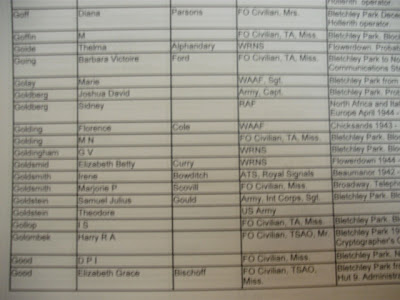 After securing some babysitting, I ran to find the Japanese Room. It was in Block B where we'd come in, upstairs. Reader I found him in the middle of a group photo. They were amazing these men. They were given six months of intensive Japanese and then they had to crack codes in it. Even to read it was a challenge because, as they showed, the written pictograms bore scant resemblance to the printed words.

I stood and looked at the photograph. I wanted to tell him that we use his blessing and that my daughter shares his birthday. I wanted to tell him that it worked as both his daughter and his granddaughter grew up to be good big girls. Instead I told the man and his son who were standing next to me, "I know his daughter." They were (or acted) suitably impressed. I felt a bit silly. 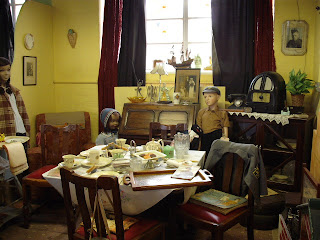 While I was upstairs in B Block I went to look at the WW2 kitchen and living room at the end of the corridor. I love things like that. I also liked the 1940s Post Office, the corner shop, and the vintage toy, clothing and household goods exhibition.

The older children enjoyed a children's guided tour. The vintage cars and other wartime vehicles we also a hit. Some of the adults got engrossed in the stories about the various spies. DD chased a cat and liked the playground. 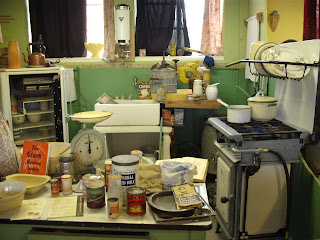 The main attraction is the Enigma machine itself. The first computer, that took up a whole room, was fascinating. I know it was fascinating because everyone disappeared inside while DD and I ran around in the rain and waited for half an hour for them to gradually and reluctantly emerge - and that was only because the place was closing. 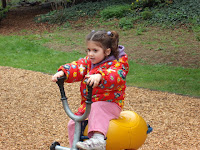 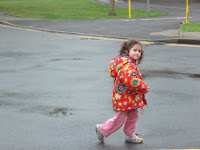