A Day Near The Beach

Yesterday we went to spend the day with my cousin, J,  and his wife, D, by the sea. We were up early, taxi to the central bus station and on a big inter-city bus in time to break open the packed breakfast of sandwiches and water (butter if you're interested). For a little girl with no car in the family, this was already enough adventure for a whole day but we didn't stop there!

We were met at the bus station in Netanya (by the sea just north of Tel-Aviv) and headed off for our first ice-cream of the day while my cousin did a few errands in town. 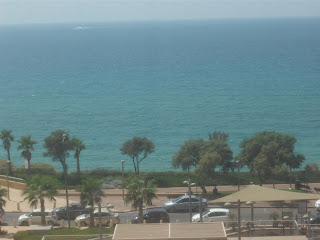 Then it was back to their flat for a quick change and down to the pool. Yes, I know the beach was about 50 metres away and we have pools in Jerusalem, but I'm too scared to actually swim in the sea after once being caught up in a wave and totally disorientated under water (i.e. not knowing which way is up in order to swim there - terrifying). So we spent an hour or so frollicking in the pool. (for pool pictures from last year look here at Our Kibbutz Holiday. No need to show more of me in a swimsuit.) DD, unlike I ever was, is fearless in the water. If we get splashed it's funny, if her whole head goes under and she gets water in her eyes she just wipes her eyes and gets on with it. 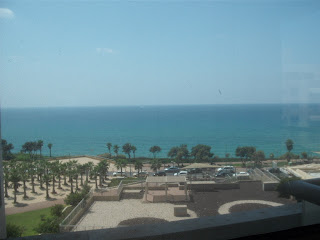 At one point she wanted go into the baby pool. After three seconds she changed her mind. "It's not deep enough here. This pool isn't fun for me." So we went back to the big pool. Going back up to the flat was a source of wonder as I'd brought a top down for me to wear after swimming but DD had to go up wrapped in her towel (having removed her swimsuit). "Really Mummy? They don't let bottoms in the lift?" "Not bare bottoms darling." 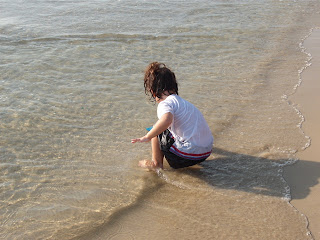 Then out for a late lunch with D while J went off to pick up his Grandson, Z aged 10, to join us for the afternoon. I have to admit that there was more ice-cream involved at lunchtime. I say lunch, but by the time the ice-cream arrived it was more like teatime. 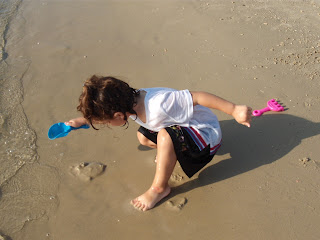 At 5pm we went down to the beach. Z had new fishing tackle to try out and DD had shells to collect and sandcastles to make. A great time was had by all. Z didn't catch any fish, my sandcastles all collapsed (it used to work ok in Bournemouth), and DD lost all her shells whilst trying to collect water in the same bucket. No one cared about any of it (DD forgot about the shells) and we trudged back to the flat caked in sand. 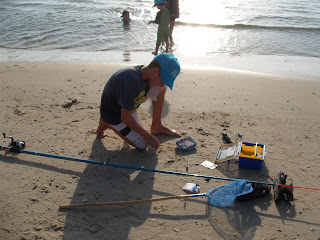 Luckily the pool was still open so we were able to  use the pool shower to wash off the sand. DD was stripped yet again and went up in the lift wrapped in her towel once more. "No bottoms in the lift!" she announced as we boarded on the ground floor. 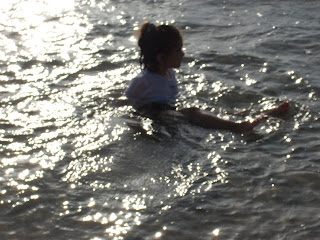 Supper out as Z didn't catch the fish for our fish and chips so we had to buy it. I sat down and asked DD to sit next to me. She had planted herself next to Z (who I must admit, had been lovely with her all afternoon). "No I have to sit with him. He loves me," she said. I visions of the future - Mum I have to follow him (any him, not necessarily Z) to Katmandu, he loves me." *Sighs* 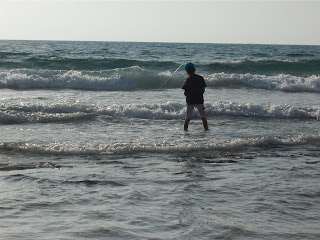 We were back on the bus at 9pm. DD finished her chips from the bag and fell asleep on my lap. After a taxi ride home the other end during which she could hardly keep her eyes open, she was in bed at about 11.30. "Goodnight darling." "What about my three stories?" 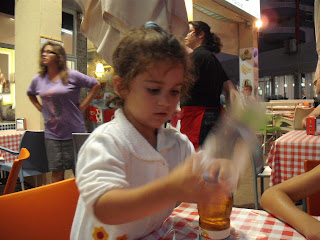 Thank you J and D for a wonderful day out! 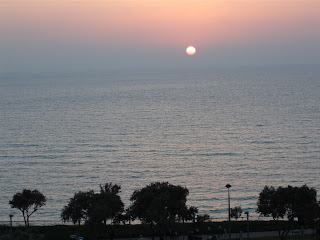