The Essence Of Childhood

I was tagged by Anna at Adventures of a Middle-Aged Matron, to find one photo that sums up the essence of childhood. We hope to highlight the tragedy in West Africa where children have nothing like such a childhood. More information at the end of the post about how we can help.

I looked long and hard for the photo to sum up the essence of childhood. It could have been the swing - I spent hours as a child just swinging and daydreaming. Playing under the dining-room table with cousins at Grandma's; sleeping with a favourite teddy; in the pool with Mummy and blowing out the candles on a birthday cake were also contenders. In the end I chose this one: 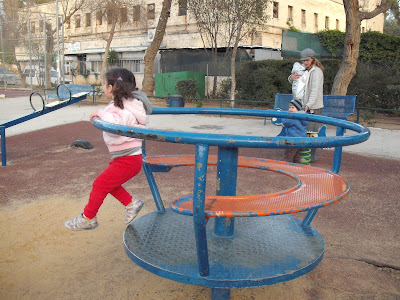 None of the above is a sign of privilege. It's not membership to a country club or piano lessons. Being able to play in the park after school is a basic right (and rite) accessible to all children in the Western World. But not to the children of West Africa.

This is what Anna wrote about the current campaign:

This is part of a blog-hop organised by Patch of Puddles to highlight the plight of West African children who have been deprived by drought and poverty of such a childhood. The charity Worldvision has until 30th August to raise funds that will be matched £1 for £1 by the British government. Donations will provide food, sanitation, health services and long-term development programmes for destitute families. I tag Midlifesinglemum and Older Mum to choose a photo that they think sums up childhood to help spread the word.

I tag Gemma from HelloItsGemma and Vix from Vegemitevix to choose one photo depicting the essence of childhood and help spread the word.
Posted by Rachel Selby at 8/05/2012 05:20:00 PM

Email ThisBlogThis!Share to TwitterShare to FacebookShare to Pinterest
Labels: charity campaign, my issues