In order to get DD to try something new I have to insist and offer a small bribe - cake for dessert usually. I've been pushing the soup issue for a while now. Let's face it, a bowl of soup in the winter is the best way to go on every level. It's warming, filling, cheap, and easy to make a big batch for a few days and some for freezing.

DD, however, was not interested. Although she loves the mandlech (soup-nuts) on their own or with grated cheese (why not?) the soup always met with a defiant, "DON'T WANT!"

Then yesterday I had one portion of orange soup left over. (Squash, sweet potato, carrot, and a dash of orange juice added to sauteed onions and garlic, salt and pepper - all liquidized into anonymity of course.) I laid down the law - no mandels on their own, only in soup. Luckily I had cake to offer for dessert.

DD was doubtful. Then I was inspired. Remembering the enormous raw beetroot I'd popped into my shopping trolley earlier, with no idea what I was going to do with it, I told her, "if you eat orange soup today, I'll make purple soup tomorrow."

Her eyes lit up. I continued. "And then we can have red soup (tomato obviously), green soup (pea), and even white soup (cauliflower and potato)!  No darling, I can't make blue soup."

So tonight we have purple soup. It's delicious, even if I say so myself. I didn't expect it to be this good. here's what I did:

Sautee an onion and a few cloves of garlic in oil, add an enormous beetroot cut into cubes, more than cover it with water and bring to the boil.

Meanwhile add a cup of tomato ketchup (or puree and sugar), a dash of soy sauce, some onion soup mix, salt, pepper and.... because beetroot has a sharp taste.... two tablespoons of honey. Reader, I kid you not. It works.

Simmer for up to an hour (beetroot is tough) and zzhuzzh (I think that's Yiddish for wizz) with a hand blender. It comes out a velvety purple. Here is mine with some mandlech. (It looks more purple in real life). 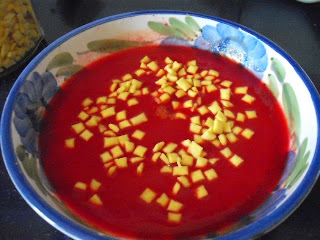 I'm linking this to Mrs M's Meal Planning Monday (go take a look to see what people have planned for the week). Even though it's not a week of meals, it is a plan to see us through the winter and add a major element to each meal.

I don't know why naming soups by colour is so much more fun and less threatening to a 4yo than naming the vegetables in it but it is. Whatever it takes eh?