Vegan In My Freezer

I was inspired by Elaine Colliar who writes a fabulous blog called Mortgage Free in Three, in which she is striving to pay off her mortgage in three years. Her challenge for January is to eat largely from her store cupboard, so to speak.

My battle plan was as follows:
1. Do a comprehensive shop taking advantage of the slashed vegetable prices in my local supermarket. You can buy up to 3kg of some basics (tomatoes, cucs, potatoes, onions) for about 6p/kilo and other veg are also reduced if you buy over 13GBP of other foods.

2. Cook up a storm and freeze portion (or 2-portion) amounts for the rest of the month. This also stops me eating the whole pot of something as the portions are already set.

3. Make a menu plan for the week and stick to it.

4. Only buy more salad vegetables and fruit , cheese (for DD), and olives when necessary. Nothing else.

So I spent Friday afternoon cooking. Bear in mind that I'm experimenting with vegan cooking whilst still using cheese for DD. I have pictures but won't be posting recipes until I've perfected them.

First I made a thick, golden vegetable soup and put two single portions and once double portion in the freezer in jars. 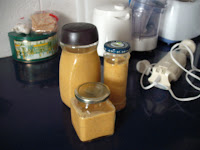 Then I used one portion of the soup to make polenta which I baked in the oven. To be eaten topped with tomato salad or ratatouille. 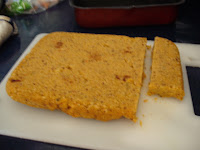 Next I defrosted some shop-bought pastry (I bought two 1kg rolls as I found a make -Et Ran - that cost 12nis/2GBP instead of the 25nis it usually costs). I made one batch of burekas using left over vegetarian bolognese sauce and another with grated cheese and olives (for DD). Two boxes of each in the freezer. 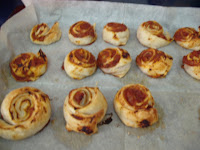 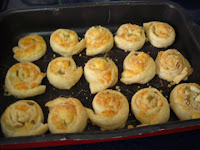 Moving on, we have oriental tofu mushroom cabbage (also with onion, garlic, spinach, soy sauce, salt and pepper). I had some of this with bolognese burekas for lunch and froze three boxes of it. Each frozen box can be one portion on it's own or, more sensibly, two portions served on noodles. [Btw, I do a Mediterranean version of this cooked with olive oil, fresh spinach or other herbs instead of the frozen spinach, and lemon juice instead of the soy sauce. served on pasta of course) 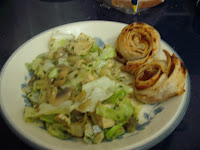 Finally, I used up a loaf of white bread that was left over at the end of the week at the kindergarten and they were looking for takers. I fried small cubes of carrot and potato with onions and garlic, added the bread cut into small cubes, seasoned with salt, pepper and onion soup powder, added a few cups of water, and cooked through. Then I baked it in small oven-proof dishes until golden brown and crispy on the top. I think you just eat this with salad as it certainly doesn't need any more carbs or vegetables. Nine portions in the freezer. 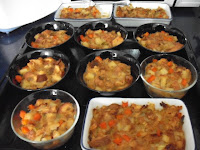 I have one more thing to make - tomato soup for the coming week as winter suddenly returned with a vengeance today. And on Monday I'll link up to Meal Planning Monday with the week's menu.