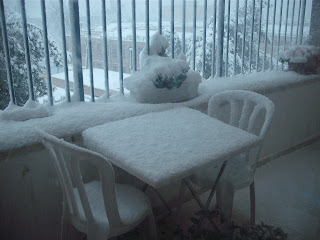 Perhaps that title's a little dramatic but that's what it feels like. We woke up this morning to this:


And then it got worse - or better, depending on your viewpoint (both physical and philosophical). 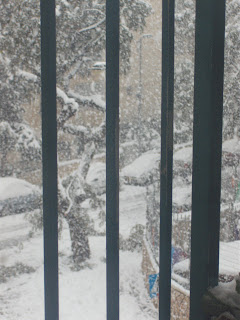 You'll notice that all my photos are taken from inside my apartment with the doors shut. DD, ever her mother's daughter, took one look at it this morning and declared, "hoohoohoo We're not going outside in this. I'm definitely not going out in this!" I readily agreed. 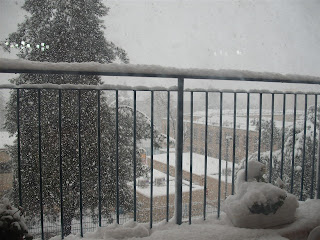 No school today and people are forgiven if they don't make it to work (though apparently they won't get paid). Even though transport is free today to discourage people from driving, all public transport has been suspended till about 2pm, when the snow is expected to ease off. And, as far as I understand, all the roads in and out of Jerusalem are closed. 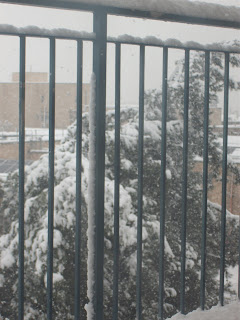 From the activity on facebook this morning, it would seem that Jerusalem is not only closed but it is also divided. There is a clear division between those who were up early and out enjoying the crisp winter wonderland (mostly mothers of boys funnily enough), and those who have battened down the hatches and are exploring the great indoors. 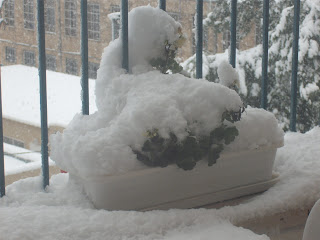 We are enjoying it all vicariously of course, through the window and via facebook. We heard the children from upstairs whooping down the stairwell with squeals of, "sheleg! Sheleg!" (snow, snow - obviously). My friend told me on the phone that she was out very early enjoying the snow with the dog who was off the lead and in his element. There is not one part of this statement I can begin to comprehend. 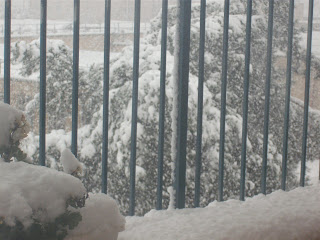 Pictures are appearing on fb of children building snowmen and throwing snowballs. The heavy American influence has introduced snow angels to the neighbourhood. Enjoy, my friends - we'll appreciate the photos and do our bit by putting the potatoes in the oven to bake and boiling the milk for hot chocolate. 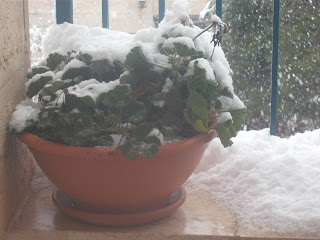 Later we're expecting the hoards from Tel Aviv and the centre of the country to arrive to see the snow. Of course they have to go to school first (tee hee hee).

And finally, I risked life, limb and dignity to walk 1.5 metres onto my balcony and take a couple of photos from the great but freezing cold outdoors. 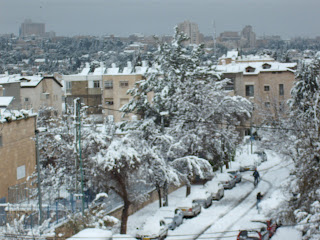