The Sound Of Music And Me 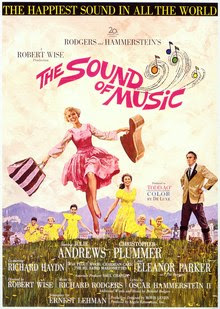 A local dvd library was closing down and I heard they were selling off stock cheaply. I went with my heart set on getting The Sound Of Music to watch with DD. But I'd missed it - the shop was shut. I was so disappointed - TSOM was so much a part of my childhood. Of course I'd had it on video once but the videos are long gone along with the VCR. I wandered into an expensive book shop and browsed at the dvds. And there it was. So I bought it for a stupid amount of money, only slashing the cost by a quarter by buying a second dvd at half price (Shrek 2 if you're interested).

I remember being taken to the West End to see TSOM, it must have been about 1969. I wore my best clothes, patent shoes, a hat and gloves with my best coat. I think it was the Christmas holidays. I thought  Liesl was the most beautiful thing I'd ever seen and I wanted to be her. I wanted hair like Brigitta. And when I grew up was going to have seven children and live in a palace next to a lake in the Alps. Much of the story apart from the singing went right over my head.

Then TSOM came to television. We watched every Christmas Day and/or Easter and other bank holidays when you had to be in front of the tv at the stated time or miss it. We had a cassette of all the songs and sang along with them from London to Wales/Scotland/Switzerland/Italy with a caravan in tow. It was one of the first films we taped on video when VCRs became de riguer. (Haven't seen 'de riguer' used much recently - it was everywhere a few years ago. Funny that.)

So I put it on yesterday afternoon for DD and I to watch together. I explained a bit to her about what was going to happen as I knew she'd get bored with the beginning if she wasn't excited about meeting the children. I caught her beaming at the screen when the children started singing and dancing.

I, on the other hand found myself crying through much of it. I could only see seven children without a mummy. A man who'd lost his beloved wife. A family who were about to leave everything they knew and owned as they fled the Nazis. A Baroness who wasn't quite good enough for the man she loved. A beautiful palace by a lake that I would never live in. Julie Andrews with a figure and a voice that I would never have. A rich husband and seven children that I won't have either. A lifestyle that pretty much died with the 1930s but the life I would have ordered had I been invited to place an order when I was seven.

DD: Why are you crying Mummy?
Me: Because it's sad.
DD: It's not making me cry.

After kindergarten today I asked DD if she'd like to watch Shrek 2 this time. "No, I want that one again with the children."
Me: What's your favourite bit?
DD: When they take those things.
Me: What things?
DD: Those things out of the car so the bad people can't chase them.
Me (surprised): Oh.
Posted by Rachel Selby at 6/19/2013 11:35:00 PM

Email ThisBlogThis!Share to TwitterShare to FacebookShare to Pinterest
Labels: The Sound Of Music, Tracks of My Years