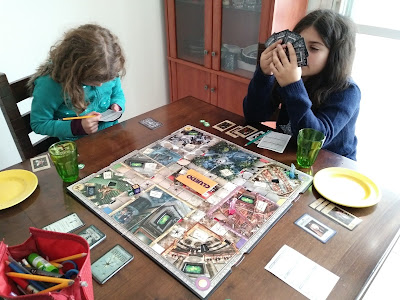 My brother and his girlfriend gave Deed the game of Cluedo for her birthday. It's the same game as we played as kids but with a Harry Potter theme.

Gone are Captain Peacock and Miss Scarlet and instead we have the characters from Harry Potter. The players are the Gryffindor pupils, the suspects are various villains, and the crime is committed with either a magical object or a spell. Interestingly, he who must not be named is not named. Voldermort doesn't appear anywhere in the game. (Phew! I don't want that evil dastard [I said dastard] in my house.)

The board is divided into locations from the books such as Hogwarts, Gringotts, and Malfoy Manor. Other fun innovations include doors that can be blocked so that you are trapped in a location, Dark Arts cards that slow your progress but can be nullified by Help cards (spells, items or allied wizards), and floo powder counters that enable you to travel via the fireplaces in some of the locations - but only when they are lit.

Deed got the game on a Sunday afternoon at my sister's while we were in London. She was desperate to play and since you need three people (and we were going home to a two-person household), we roped my mum into a game that evening back at her place. We made the mistake of thinking the Dark Dark Arts curses applied to everyone every time (we didn't read them carefully enough) and so we forfeited all our floo powders before we had the chance to use most of them - which eliminated a lot of the fun and slowed down the game considerably. And we got preoccupied with collecting help cards instead of trying to solve the mystery.

My brother's girlfriend also wanted to play but she had a prior arrangement on the Sunday evening. So she decided that their date night on the following Tuesday would be to go and play Cluedo with Deed at my sister's where she would be staying the night while I went out with friends. (Who says romance is dead?) They played the whole game only to find out at the end that they had the wrong mystery cards in the envelope and so nobody actually dunnit. Deed admitted to me afterwards that it was her fault because she'd accidently picked from the location cards twice. They didn't start again as they'd already been playing for hours. Obviously as the game was unsolvable. Oh well, the game's the thing. 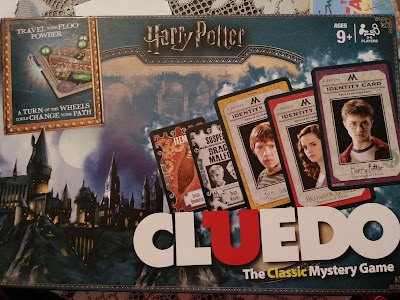 When we were starting to pack to come home, I insisted that my mum join us for one final game because I knew that the two of us would not be able to play unless we had a guest who understood English. This means that most of Deed's friends won't be playing it for another couple of years. This time we got to the end without incident. It takes a lot of practice to become a good wizard.

Today Deed's friend came round to play. She happens to be an English speaker so we of course grabbed the opportunity to play Cluedo. It was surprisingly easy to explain the game and we had fun.

Deed thinks this is one of the best presents she's ever had. I lie awake in bed trying to work out a way the two of us could play it together without a third.