I Have A Poppy 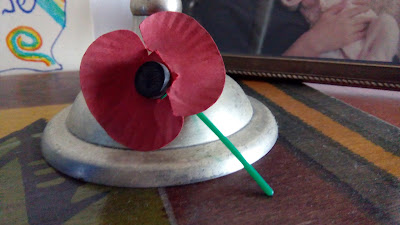 I have a poppy. I think the last time I was in the UK on 11/11 was in 1987 just before I came to live in Israel so my poppy must be 29 years old. It's an old paper one and a bit torn. I have a poppy but I don't have a button hole so I've put the poppy next to my Shabbat candles (and DD's candles that she made in art) so I'll think about it when I light tonight.

I've also added a memorial candle. We light these 25-hour candles on the anniversary of a death or major tragedy. WW1 wasn't a specifically Jewish event but the outcome did affect my life because I grew up in an England that was free and accepting of other cultures and religions while allowing us to be fully English and patriotic at the same time. 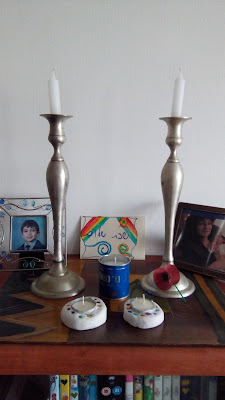 And then came WW11 in which Britain and the allies defeated Hitler and almost certainly saved my British-born parents' lives and allowed me to be British-born and proud of it.

I was in Israel during the Falklands and during the Afghani and Iraqi operations. I sang along and cried with The Military Wives Choir from my armchair in Jerusalem.

When I was a little girl I was always at Hebrew Classes at 11 am on Remembrance Sunday. The class stopped and we all stood for the two minute's silence before going back to our Bible studies and Hebrew reading practice.

Tonight on 11/11/2016 I will light my Shabbat candles and remember that 100 years ago around six million men marched off to war and over a million of them did not return. They made the ultimate sacrifice so that people like me could go to Hebrew classes on a Sunday morning in London, buy poppies from the poppy seller at the station on our way to school, and have the carefree childhood that we enjoyed.