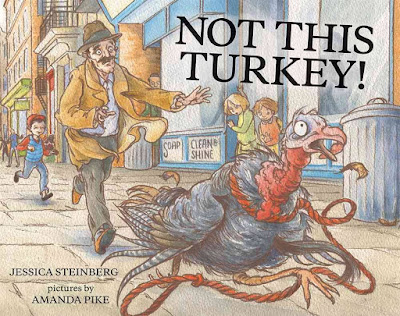 When DD was little we used to go to story-time in the library every week. I, along with the other mothers, would take my turn choosing and reading stories to the group of about 20 regulars and their mothers. As our children grew too old for picture books, we moved on and a new generation took over.

Two days ago the word went round that Jessica, one of the story-time mums from our story-time heyday, would be reading her first published children's book. Of course all the old crowd dragged our seven and eight year olds back to story-time for a glorious reunion and, very timely for the time of year if you're American, Not This Turkey!

It's a Thanksgiving story from post-war New York. The story could have been from any time but I was able to work out the rough time in which the story is set because of the baby. The family are new immigrants from Europe who have been in the US for four years. They have a number of children including one little American-born baby called David.

The thing is, I know this David. David is now a grandfather living in Jerusalem. I taught his, now grown up, children in school.

Jessica told us that she was at David's house and he told the story of how his father ..... well I won't give it away. Jessica wrote the story, changed a couple of details so as not to give children nightmares, and got it published as a delightful children's picture book.

And me... I obviously spent all evening trying to remember old family stories that could possibly become children's picture books.

Email ThisBlogThis!Share to TwitterShare to FacebookShare to Pinterest
Labels: Books, life in Israel